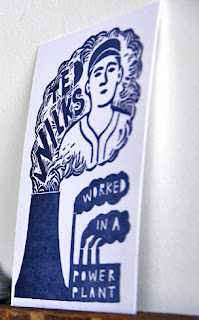 Forget Mike Trout. Ignore Miguel Cabrera. And don't even bother with Buster Posey. The MVP of baseball in 2012 is Amelie Mancini.

That's Most Valuable Printmaker. Amelie has been on an amazing hot streak of late--incredible not just because this "on fire" time has occurred in the off-season.

She's added two new baseball card series to her indescribably charming earlier work. And dare we say it, the newest set--"Curious Second Careers"--is arguably the finest one yet, the most free-form and freewheeling of all (at least thus far). 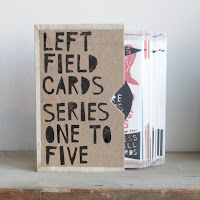 You can also buy a special box set of the five series. At $150 it may seem pricey, but our gut tells us that it's going to be a terrific investment. But buy sets of cards that you can display, too. Stuff this good shouldn't be sitting around in a safe deposit box, for Crissakes! 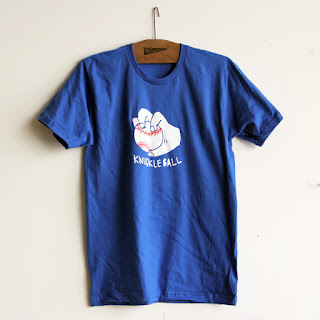 And, if only to make this inveterate T-shirt wearer weep tears of joy, she's created a T-shirt line that blows the cards away.

Particularly spectacular are the shirts depicting pitching grips--and, even more particularly, the one with the knuckleball all by itself. (Let's all hope that the Mets get things together with R.A. Dickey so that Amelie and a host of others can proudly wear it to Citi Field in 2013). [EDIT: sad to report, based on news items on 12/16, that it looks like Dickey won't be coming back after all...] 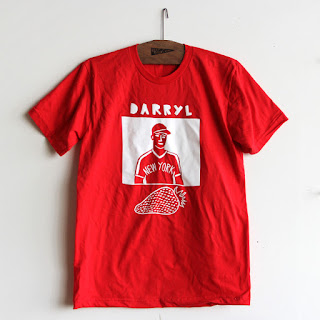 And the Darryl Strawberry shirt, in all its radiant, radical redness, is the perfect combination of sociological edginess and aesthetic esprit de corps.

There is just enough time for those of you who've got baseball folk on your Xmas gift list to get these ordered--go to the Left Field Cards site and do it now!

Just one thing, Amelie. When are you going to start selling those Left Field Cards hangers? Gotta have 'em!!