BALLAD OF AN EX-THIN MAN

"Something is happening here/But you don't know what it is...

Symptomatic of a wayward career spent in the cantilevered world of high offense, loose women, numbers-oozing fanboys, and a state of blissful obliviousness once thought humanly unreachable, Andruw Jones has left the building in a way that is frighteningly apropos.

Just days after signing a contract to play in Japan, Jones managed to get arrested for spousal battery while passed out from an excess of drink.

Such a state seems all too on target as a way to characterize Mr. Jones--who, back in the day before he ate his way out of being the next Willie Mays, was alarmingly talented. Fanboys with computers were stroking more than their keyboards when they projected his career (all this, mind you, before the actual coming of a true young God...a natural with a fishier sounding five-letter surname).

They lined up eight to one for Andruw over Vlad Guerrero, and somewhere between 35-40% of 'em will try to invoke their defensive "metrics" to argue for him still.

A somewhat smaller percentage will band together to push for his Hall of Fame candidacy.

One of the facts they won't be using will be that Andruw holds a record that, when you examine his career with a steady eye, makes perfect sense for a player who embodies a firm but hazy refutation of William Blake's famous dictum: "The road of excess leads to the palace of wisdom."

What's that record? Andruw is one of just 26 players who've hit 50 or more homers in a season. (It's happened a total of 42 times.) The average OPS+ for these hitters in the seasons where they hit 50+ HRs is 184.

The lowest OPS+ for anyone in such a season is.... 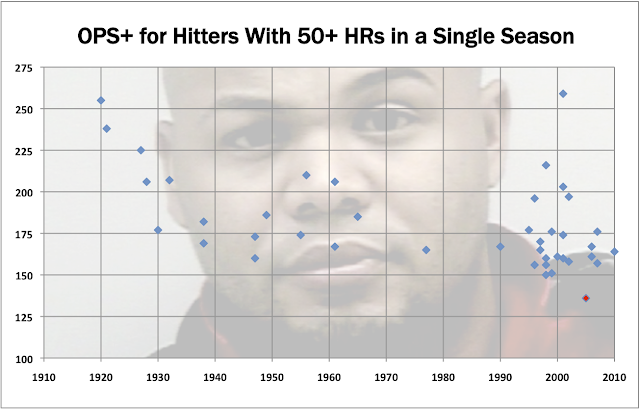 In the midst of the Dodgers' astonishing spending spree that began last August, it's all too easy to forget that they signed Andruw to a big contract in 2008, despite the clear signals that he'd pretty much eaten all of his talent. The result was a level of decrepitude that literally had to been seen to be believed--and even then, it was unbelievable.

To his credit, Andruw regrouped, summoning up the echoes of his "comatose masher" style of hitting that he'd pushed to its limits in 2005, sleepwalking his way through four more seasons as a platoon player--but that original collapse was so epic that some folks (in dark jest only, of course...) suggested that he was the presagement for the financial catastrophe that followed in the fall of '08.

Assessing Andruw invokes the wry explanations that the man who wrote the words which opened this rueful diatribe gave when asked to explain the song in which they appeared. As was especially the case at the time, Bob Dylan feinted with the panache of Muhammad Ali, and stated:

"This is a song that I wrote a while back in response to people who asked me a whole lot of questions. You just get tired of that every once in a while."

Pressed to name those "people," Dylan rolled one eye, then the other, and replied:

Rest assured that the real "next Willie Mays" will not put his eyes in his pocket...he will, in fact, never take his eyes off the ball.
Posted by Near-Genius Nephew at 5:43 PM