AN ODYSSEY THROUGH THE WORLD OF CLOSE GAMES/5


Let's continue with the historical WPCTs in close games for all post-season teams.

Instead of averaging them, as was done in our last installment, let's look at "scatter charts" for the three categories of post-season teams we'd defined earlier: 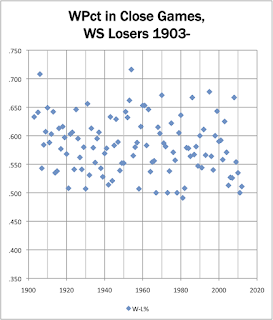 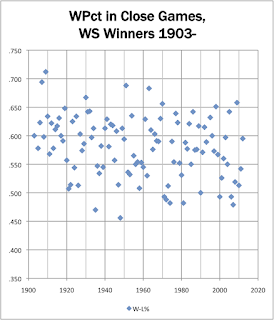 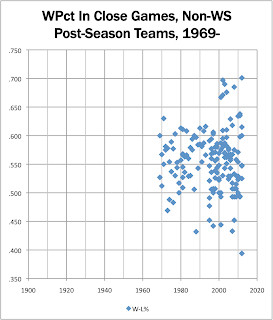 What we see right away is that one of these isn't like the other two...and it isn't merely because the non-WS post-season teams don't exist prior to 1969.

World Series teams have virtually an identical distribution of close game WPCTs. Over the course of baseball history (or, at least the portion of baseball history that includes the World Series), these teams have been almost evenly matched in every way. Oh, sure, there are differences between WS teams in terms of overall WPCT and WPCT in close games, but these differences have averaged out.

What we see in the emerging history of the post-season,
however, is what appears to be a tendency toward extremes in close game WPCT. I believe that we'd mentioned previously that in 2012 the Orioles' .701 WPCT in close games (again, defined as games decided by two runs or less), which was fourth best all-time, was offset by the Cardinals' .394 WPCT in such contests.

That is a new all-time low for close game WPCT for a playoff team. (That said, we're not going to explore that anomaly right now, baffling as that performance might be.) 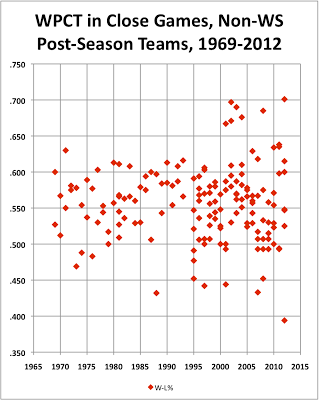 The third scatter chart shows a stronger separation in the upper zone. Even the teams with .600-.650 WPCT in close games seem to be increasing--and it's not just a function of extra playoff teams...this trend has emerged over the past decade. (To make this pattern clearer, we've redrawn the third chart to spread its data across the full expanse of the chart. Oh, and we made it bigger, too.)

Now, why would this be happening? (We will assume, at least for now, that this is not just some random variation, even though some might find it imprudent. Our view: it's more likely to be impudent than imprudent, but long-time readers already know that.)

Yes...why. (As Brock Hanke knows, that's always the real question.) Why is more separation in close game WPCT occurring among playoff teams? Why are there more teams making the post-season with better records in close games relative to their overall WPCT?

The reason that makes the most sense, given the particular time frame in which it's occurring, is that the increasing specialization of relief pitcher contains the potential for teams to "steal" extra close-game wins. Managers use more pitchers, but the roles for these pitchers become well-defined around the scenario that privileges the close game; as a result, it's increasingly possible to shepherd such over-reaching performance over the course of an entire season.

Now this, or something closely like it, is what Tango and MGL (those often-noisy prime movers of The Book) have been pulsing through their echo chamber for awhile now. The Tango minions see this bullpen approach as something to expand further, arguing for an even more radical realignment of pitching innings. We tend to think, however, that going further in this direction just might flatten out the type of results that we're seeing in the above chart. Overuse and overexposure of these carefully deployed relievers could produce diminishing returns. What we're looking at is a little seam in the fabric of baseball's system, a skewed result that stems from a very particular application of pitching resources.

There's no way to prove it, of course, until some enterprising manager takes it a step further. The way we see it is that this approach is vexing to neo-sabe conventional wisdom because it is tending to create a class of teams that significantly exceeds their Pythagorean Winning Percentage (PWP) as a result of these strategies. That this might actually be at least a semi-viable approach to team formation is something that's clearly not an acceptable thought balloon, even (and maybe even especially) for those who want to make further cuts in starting pitcher innings. This is the type of anomalous result that is simply not tolerated in the ideologically strictured post-neo world.

Since it will be awhile before any team adopts a more aggressive approach to innings usage for relievers, we'll almost certainly have enough time to follow this trend and see if it continues to produce teams excelling in close games. We won't be surprised to discover that it does just that.
Posted by Near-Genius Nephew at 11:56 PM