We will now officially "cherry-pick" from BTF (Baseball Think Factory) the way they do from everyone else.

The fugitive world of baseball statistics is fast becoming meta-parasitic anyway, and the handy chart compiled by the embedded insurgent renegade group RBI, showing how the types of parasitism in baseball discourse have operated over the past few seasons (with an entirely new strain emerging in the past year), is a telling indicator of the (apparently) inevitable direction that things are taking. 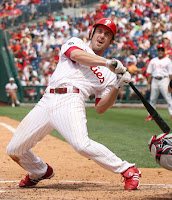 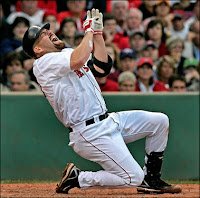 Actually, we are stealing our own list out of a thread that has grown as frayed and brittle as many of them do over at the Shrink Factory, where fabric softener is no longer an optional product. The list came from a bit of business following up a slice of commentary at Bill James' web site, where registered site visitors can engage Bill in questions and comments, sometimes about baseball, sometimes not.

In this case, it was a set of related questions about the Hall of Fame likelihood for two highly regarded late-blooming infielders, the Phillies' Chase Utley (right) and the Red Sox' Kevin Youkilis (left)--who are both turning 33 prior to the start of the 2012 season, and who are showing some signs that they might not be able to sustain the career momentum necessary to power their way into Cooperstown.

Both players have a 127 OPS+ going into next season, but there's a difference in their number of career games played--Utley (1109) has about 200 more than Youkilis (911). James noted the small number of players in the Hall with less than 1,000 games at the age of 32, and pretty much consigned these two also-ran status.

That got us thinking about the players who were like these two--as good or better--who'd come up late and had somewhere between 911 and 1109 games in their careers at age 32. How many were there? How many of them have made it into the Hall? Are there other late bloomers who've been overlooked in terms of the Hall due to short careers?

We went to Forman et fil and created a list of players in what we might call the "Utley-Youkilis Gap." It turns out there are 29 of them. We've sorted them into the list below at right, and will now proceed to explain (as best possible) what all the freakin' color-coding means. 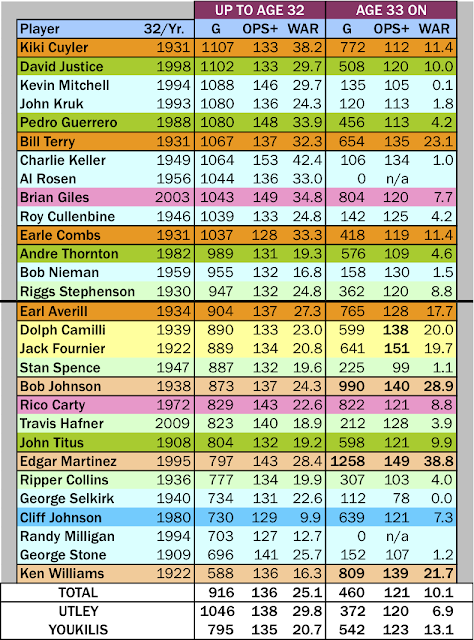 First, the players in "hard orange" are the four who beat the odds and made it into the HoF--Kiki Cuyler, Bill Terry, Earle Combs, and Earl Averill.

The rest are color-coded by the number of games they played from age 33 on. The guys with 800 or more games played from age 33 are listed in two different color schemes (we'll explain the reason for this later--three (Ken Williams, Edgar Martinez, Bob Johnson) are in light orange, while two (Brian Giles, Rico Carty) are in pink.

We did the same thing with the guys with 600-799 games played at age 33 on. Two (Jack Fournier, Dolph Camilli) are in yellow; one (Cliff Johnson) is in blue. (Can you figure out why the reason for the subcategorization?)

Everyone with 0-199 games is shown in light blue.

The separation of the top groups into two separate color codings is to differentiate the players whose OPS+ averages actually increased in their 33-year and up seasons. Five players did that: Williams, Martinez, Bob Johnson, Fournier, Camilli.  Only three of these guys saw their OPS+ averages and their WAR totals increase: Williams, Martinez, Bob Johnson.

And those are the three guys who, in our estimation, deserve to be in the Hall of Fame.

They beat the odds. Everyone lost fifteen points off their OPS and saw their WAR total drop 60% in the 33+ age window.

These guys went the other way--and actually played more games from age 33 on than they did through age 32.

Edgar, of course, is the current case--and we're just going to have to hope that the BBWAA gives him a full ride over the ballot process. This next vote will give us a much better sense of how things are going to go--with any luck, Edgar will go up into the mid-to-high 40s due to the lull in the coming "perfect storm" of HoF candidates that will arrive beginning in 2013.

Johnson and Williams are going to require a lot of proselytizing--and it won't be a walk in the park, even compared with the arduous efforts expended on behalf of Bert Blyleven. However, it's easier to convince a VC body than the full BBWAA, so educating folks as to just how rare it is to beat your "decline phase" is something that's possible with such a small group. Or so we can hope.

We wouldn't give much for either Johnson or Williams' chances. But both did a wonderful job of defying time, and this is a very rare achievement worthy of recognition.

(BTW, the numbers for "UTLEY" and "YOUKILIS" on the big chart are not for the individuals, but for the groups broken out by the thick line between Riggs Stephenson and Earl Averill. The "Utley group" is above (more than 911, less than 1109 games at 32). The "Youkilis group" is below (less than 911 games).

It's going to be harder for Utley to play more games after 33 than through 32 than it will be for Youkilis, but if he could do so, it would probably mean enshrinement (especially if he can manage to stay a second baseman well into his late 30s). Chase is farther advanced WAR-wise than anyone else on the list (Terry gives him a very close run for his money, but Bill is one of the ~30% of these guys who had a better year at 33 than at 32. Utley really needs to do the same: he's going to need to shake off the injuries that have slowed his meteoric rise.

Youk made a successful move to third base last year, but his body type is such that it doesn't seem plausible for this switch to be viable for more than a couple of more years. He needs the Red Sox to decide that he's indispensable in their lineup: he's got about a 14% home park advantage at Fenway, which is exceptionally well-suited to his doubles-centric batting style. If he tries to jack up his HR totals, it might backfire on him, causing his BA to drop too much to keep him in MVP contention.

I expect Utley and Youkilis to beat that 50% figure, but they probably won't break 70%. Clearly, the higher this percentage, the greater chance they'll have for Cooperstown. Utley has the better shot, given his head start in games and the fact that he's been playing the tougher defensive position.

What's also clear is that this group of late-blooming players is quite interesting unto itself. They still need a shortstop and a catcher to be able to field a full team, but they'd be an awfully solid hitting unit if they could do that.
Posted by Near-Genius Nephew at 9:23 PM