THE 1-0 MIRACLES OF THE '69 METS AND OTHER ANOMALIES

What a coincidence that 1-0 games are back to 1969 levels (well, not quite: there were 112 1-0 games in both 2011 and 1969, but there were more total games played this past season, so the percentage of 1-0 games was still higher in Ye Olde Year of the Moon Landing and the Miracle Whip™ Mets), but it's close enough for government work and our Curler Boy® Chart (below). 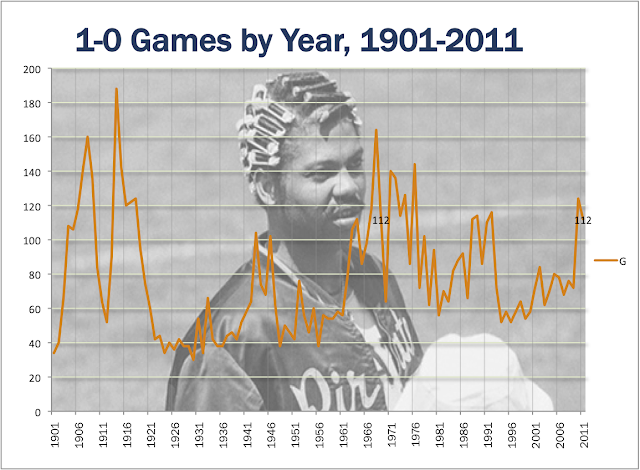 There are so many wacky things that were part of the Metsies' improbable run to glory that year (Nixon, war protests, Weathermen, the invention of heavy metal, etc., etc.) that it just makes the blood run cold while The Wind Cries Mary (sorry, axtually released in 1967), but we'll stay on point and remind you that the Mets kept the echo of 1968 alive in baseball's most expansive year ever with 14 1-0 games and a full half-season's worth of contests in which both teams combined to score six runs or less.

The starting pitching was righteous, all right--and those former hapless denizens of Flushing went 9-5 in the 1-0 games and went 53-28 in those low-scoring games, ratcheting up their record over the last two months of the season with hellacious hurling from such unlikely stalwarts as Jim McAndrew and Don Cardwell.

As our chart at left indicates, the Mets reached a crescendo of run suppression in August and September of '69, following up a 13-6 mark in August with a well-nigh unconscious 15-2 record down the home stretch.

Let's face it, winning 24 of 34 games (.706 WPCT) in which both teams score a total of 3 runs or less is a pretty astonishing feat. The only other teams to win at least two-thirds of such games with such a quantity of games during the season were deadball-era teams (the 1913 Senators were a mind-boggling 26-4 in such contests) and the 1968 St. Louis Cardinals (26-13). 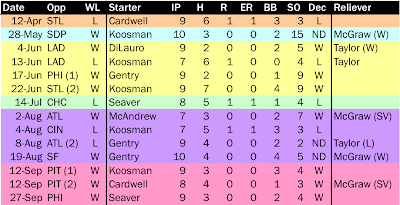 Part of the incandescence of the Mets came from their 1-0 wins, in particular the legendary double 1-0 wins in Pittsburgh on September 12th behind Cardwell (game two) and Jerry Koosman (game one). Adding spice to the proceedings was the fact that in each game, the only run was driven in by the pitcher.

Three weeks earlier, the Mets had won a 1-0 game in which rookie Gary Gentry battled the Giants'  Juan Marichal to a draw, leaving after 10 innings in a scoreless tie. Later in the game, the Mets employed a four-man outfield against Willie McCovey: in a bizarre and miraculous variation on his ill-fated line drive in Game Seven of the 1962 World Series, McCovey drilled a ball that no three-man outfield could have possibly caught.

With four outfielders, however, Cleon Jones was able to be in position to make a leaping catch to keep the ball in the park. The Mets would eventually win the game, 1-0, in the sixteenth inning.

Koosman was the man who was in the most of these 1-0 games, turning up in a total of five of 'em.

What the breakout by pitcher shows is that Tom Seaver and Koosman were simply 1-2 dynamite for the Mets, combining for a 13-2 record when they pitched in doubleheaders. Right behind them, however, is McAndrew, who didn't get the run support that the two aces received and went only 3-3 in these games. And Cardwell wasn't exactly chopped liver, either.

Another serious difference has to do with how relievers were used. Tug McGraw was a combination long-man/closer, averaging nearly two innings an appearance and not so occasionally pitching much longer (and we're not counting his four early-season starts).

As Leonard Koppett suggested forty years ago, however, the Mets' most pivotal game in 1969 may have occurred in their very first doubleheader of the year. Having lost three straight to the Cubs in their first meeting of the year--including a blown save from ex-Cub Cal Koonce in the first game of their April 27th doubleheader at Shea Stadium--the Mets found themselves in a scoreless game with two-game swing in the standings dependent on the game outcome. McAndrew, who'd been pitching terribly in the early going, inched his way through five innings. McGraw threw four innings of scoreless relief and the Mets won on Jones's three-run walkoff HR. It was the game that stemmed the tide and, according to all who were around at the time, gave the Mets the confidence that they could play with the mighty Cubs.

This was a 3-0 win, however, and is a bit off-point...the early-season 1-0 game that gets the most ink is the one on June 4th, as the Mets were in the midst of what would become an eleven-game winning streak. 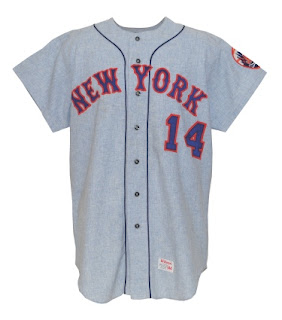 Obscure lefty Jack DiLauro, obtained from the Tigers over the 1968-69 off-season, made his first big league start in this game--and proceeded to shut the Dodgers out for nine innings with stuff that wouldn't have blown over a feather. It took the Mets six more innings to finally push across a run, but DiLauro had come out of nowhere to fuel the improbable rise of a franchise still living on the fumes of these distant memories.

These may be too distant to bring Gil Hodges a slot in the Hall of Fame (the new version of the Veterans Committee will convene next week, with the fate of several notables hanging in the balance), but the Mets could use a little something to lift their spirits. No one ever did so much with so little: here's on ya, Gil.
Posted by Near-Genius Nephew at 11:06 PM