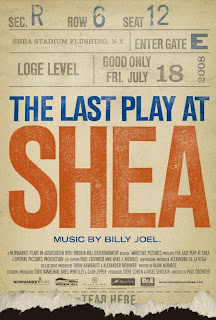 Combining the life stories of Billy Joel and Shea Stadium with a minor-key glimpse at the relentless, Robert Moses-driven suburbanization of Long Island, Last Play at Shea captures a moment of bittersweet transition that valiantly attempts to valorize a world that is falling apart. (In the case of Shea Stadium, of course, this is literally true: within six months of Joel's two concerts there in July 2008, the facility would be demolished.)

Though we were steadfastly resistant to Joel's music during its heyday, the passage of time has softened the edges of his work: like Elton John (with whom he began touring after giving up songwriting in the 90s), his gift for melody ultimately forgives many sins. If one had to knock down Shea Stadium, Billy was indisputably the man to give it its sendoff.

The filmmakers knew they were creating too many narratives for their film to escape a feeling of it being neither fish nor fowl, so they found a fourth strand that gives it a semblance of narrative drive--they relate Shea Stadium's history to the iconic event of its youth, the 1965 Beatles concert. 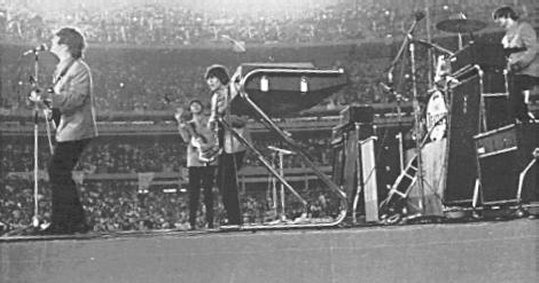 This fourth layer provides a musical link between Joel and the Moptops, and injects suspense into the unfolding story: will Paul McCartney find a way to appear at Joel's farewell to Shea? Will things come full circle before the wrecking ball?

As one watches the contrasting visuals at Shea--we're talking daytime and nighttime imagery--it is still astonishing to contemplate how divergent one's response could be to it. In the daytime, in the non-descript "garbage dump meadow" that Robert Moses hand-picked as the location for the Dodgers (and caused them to flee to California), it was nothing other than a dump. All that "multi-purposeness" and the attenuated circular design seemed underwhelming, particularly since its best spatial representation was clearly not from the fans' vantage point, but from the players'. 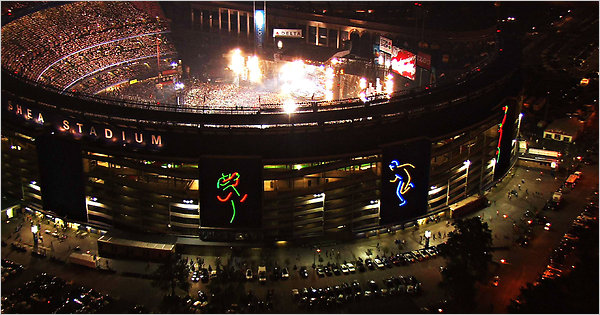 But at night--especially when the camera at the Joel concert looks out into the audience from the center field stage--Shea Stadium (surely the only major league sports facility named for a lawyer...) takes on a good bit of the classicism inherent in its design. The interplay of light and shadow actually transformed it into--OK, a beautifully-lit dump, but a classy dump. With this added resonance, and bathed in a parallel glow of hard-edged nostalgia, Shea finally achieved a long-withheld dollop of grandeur as it moved inexorably toward its extinction.

Our own favorite memory of Shea was a doubleheader attended there in 1984, a point in time when the Mets were coming back into prominence under manager Davey Johnson, while Shea Stadium itself looked shockingly unkempt. The fans around us seemed to draw a peculiarly venomous level of disdain from these surroundings, already deep into the vitriolic recesses of what Billy Joel had termed the "New York state of mind." 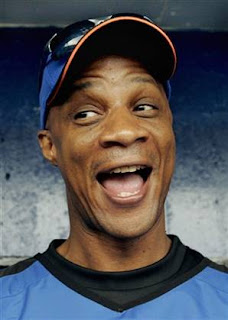 Much of this barely-contained rage was directed at Darryl Strawberry, the march-to-his-own-drummer kid from the wrong coast (Crenshaw High, Los Angeles). At one point during the doubleheader, when Strawberry overran a hit in right field, allowing the Padres to score an extra run, one particularly terse New Yorker summed things up with a brutal flourish: "This ain't love/hate, you stiff--this is HATE/HATE!!"

Despite the fact that Strawberry hit homers in each game (including one in the second game that capped a five-run, two-out rally that gave the Mets a lead they would never relinquish), the fans still seemed more inclined to drop Darryl into a tank of water filled with piranhas. Shouts of "Stiff! Stiff!" resounded when Strawberry struck out in the first inning of the opener, and left a couple of men on base by grounding out in the third.

In the fourth, with a grouchy fan base in mid-grumble, Darryl slammed a long home run off the Padres' Andy Hawkins. As the stadium transformed itself into deafening cheers, two wise guys behind us were overheard to hear even as they applauded: "Eh, y'know...he's STILL a STIFF!!" 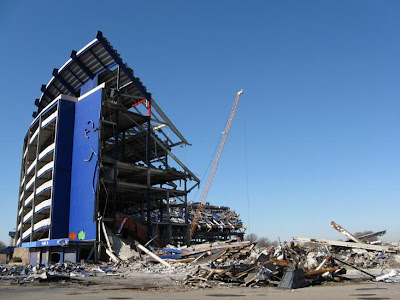 Which, in some way, makes us savor the closing image here--one that, in an odd way, visualizes the divided consciousness of the New Yorker. Especially those who, like Billy Joel, were exiled from the mean streets, but needed to feed on them vicariously in order to have an identity. Those who found it both easy and difficult to jettison the past while still yearning for it.

Did Paul McCartney show up? Does the documentary reveal that the concert really wasn't the "last play at Shea," given that it was held in the summer of 2008, a few months before the Mets completed a late-season collapse that was a replay of the previous season and a weird premonition of the financial meltdown that is itself strangely captured in this image?

You'll just have to watch it for yourself to find out.
Posted by Near-Genius Nephew at 10:14 AM