Monday, April 30, 1962 was another light day on the MLB schedule, but there was no rest for the Giants and Dodgers, who swapped opponents.

In San Francisco, the Giants touched Pittsburgh's fading lefty Vinegar Bend Mizell for four runs in as many innings, their scoring bookended by homers from Willie Mays (#7) and Orlando Cepeda (#6). Mizell would be traded to the Mets a week later and would soon parlay his cornpone charm into three terms as a congressman from North Carolina. Another North Carolina boy, Gaylord Perry, turned in what would prove to be his best outing of the year, limiting the Pirates to just four hits. (It would be his only complete game of the year.) Final score: Giants 4, Pirates 1.

At Dodger Stadium, Stan Williams made his first start in two weeks, overcoming his spotty control and receiving help from the Cubs' erratic shortstop Andre Rodgers, who managed to get himself thrown out twice on the basepaths; Chicago managed only five hits in the game, and Rodgers committed a throwing error in the fifth that gave the Dodgers a 2-1 lead. Andy Carey added an insurance run when homered in the sixth off lefty Dick Ellsworth, who would go on to lose 20 games in 1962 before making a remarkable turnaround the following year (after the strike zone change). Final score: Dodgers 3, Cubs 1.

Here are the April hitting stats for the two teams, sorted in descending order of OPS: 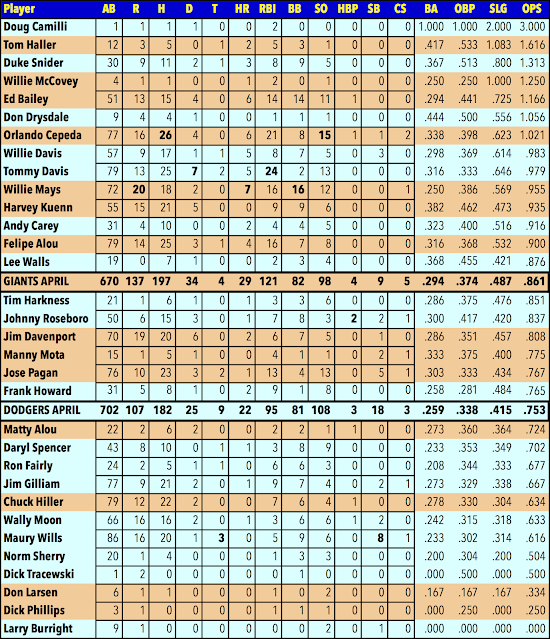 Giants' batters are shown in orange; Dodgers' hitters are show in blue. It is permissible to be shocked at how little playing time Willie McCovey received in the early going; that will change as the year progresses. Conversely, Duke Snider's hot start did not keep him in the Dodger lineup for much longer.
As we'll see, April proved to be the Giants' best overall month at the plate; the Dodgers would improve their hitting in May and reach their peak in July.
TEAM RECORDS: SFG 15-5, LAD 13-8
Posted by Near-Genius Nephew at 12:16 AM