A little telescoping here in today's entry as the Giants have April 26th off, thus we cover both the 25th and 26th here (leaving us room tomorrow for an entry outside the "60 Years Ago" format). 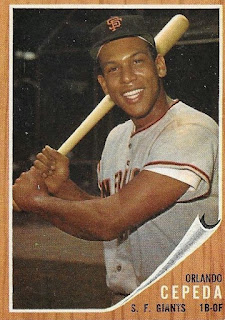 As noted, the Giants are about to embark on a sensational skein of victories, and the 25th demonstrates that it's a robust offense that will lead the way. Down 2-1 to the Pirates' Bob Friend going into the sixth inning, San Francisco turns things around thanks to homers from Orlando Cepeda (three-run shot) and Ed Bailey (solo) to take a 5-2 lead.

Don Larsen has a spectacular night for the Giants, relieving Gaylord Perry in the bottom of the sixth with two men on and no one out, whereupon he not only strikes out the side to quell the Pirates' threat, but he also singles in a run in the top of the seventh. Larsen will wind up pitching four innings in relief, striking out eight as he saves his first game of the year on behalf of "young Gaylord," whose first big-league win (in a career that wound up with 314 of them) this is. Final score: Giants 8, Pirate 3.

In Chicago, Larry Sherry's day in relief is not nearly so successful: brought in to protect a 6-5 Dodger lead in the bottom of the eighth, Sherry surrenders the tying run on a homer by Ernie Banks, and then coughs up the game when the mercurial former Giant Andre Rodgers hits a three-run shot. Final score: Cubs 9, Dodgers 6. 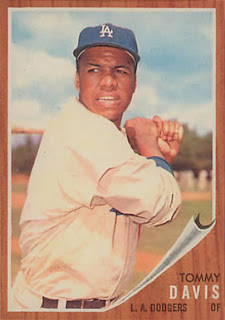 The next day (April 26), the Dodgers re-establish control as the trio who would compose their starting outfield for the bulk of 1962 has its first concentrated day of offensive domination: Tommy Davis doubles twice and triples, driving in three runs and raising his average to .397; Frank Howard hits his second homer of the year and also drives in three runs; and Willie Davis hits two homers.

The Dodgers score four in the fourth, one in the fifth, three in the sixth and four more in the seventh to bail out shaky performances from starter Pete Richert (suffering from control problems and soon headed back to the minors) and Ed Roebuck (5.63 ERA in April; he'd turn things around with a 1.21 ERA in May). Because of Roebuck's ineffectiveness, the official scorer denied him a win in the game despite him being on the mound when the Dodgers took the lead; Ron Perranoski was given the win despite pitching in a situation that ordinarily would've earned him a save. Final score: Dodgers 12, Cubs 5.

But the game's most noteworthy aspect came when Tommy Davis added those three RBI to his season total; when the day's games were over, Tommy would be in possession of the NL lead in RBIs with 23, one ahead of Vada Pinson. It would be a couple more weeks before Tommy is permanently ensconced at the top of the NL RBI leaders list, but here is the point when he becomes a potent offensive force for the Dodgers. (Davis would wind up with 153 RBIs for the year, which is the highest single-season total for any hitter over a 48-year span beginning in 1950 and ending in 1997.)

Posted by Near-Genius Nephew at 2:34 AM