We know that many folk dismiss small samples out of hand; but it's clear that those folk are short-sighted. The folks who are suddenly panting heavily about run-scoring levels are primarily folks who grew up on 70s and 80s baseball, and have simply forgotten what the runs-per-game averages were (mostly) like in those decades. Their "systems modeling" approach to the game has brought it to its knees, leaching out so much of the offensive diversity that can often be discerned in small sample sizes.

And with that precept in mind, we'll spend some time during the "off-days" of the 1962 Giants-Dodgers project to dive into such manifestations of diversity--beginning with another controversial statistic: RBI. We'll use it as a way (not "the" way...) into short-term peak performance, and see what it can tell us. What our fine-feathered friends who yodel about abstracted "adjusted runs/wins" models all tend to forget is that, aside from the homer, runs can't be scored by themselves. So here we go... 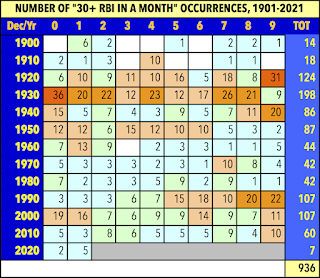 First, let's look at the data set. Since 1901, there have been 936 examples of a player driving in 30 or more runs in a month (a month being, in this case, an actual month, such as those between April and September, as opposed to arbitrary 30-game units). While we think it's a shame that baseball researchers continue to disparage nineteenth-century baseball--in particular orphaning the years from 1893-1900 (a time frame where the pitching mound was set to its current distance from home plate)--we've got to go with what we've got...so, 936 since 1901.

And that's anatomized in the "heat map" version of our "patented time-grid chart"™ chart (at left).

As you might expect, the heat map approach demonstrates that the incidence of "30+ RBI months" is strongly correlated with run scoring levels (i.e. the upswing you see in the 1920s, peaking (as usual) in 1930 and continuing in the subsequent decade due to the sustained high offensive levels in the AL). But despite the peak numbers in the 20s/30s and later in the 1990s/2000s, the pervasive trend for 30+ RBI months is scarcity: in 58 out of the 122 years on the chart, the number of 30+ RBI months per year is five or less. The average for all of baseball history is just under eight per year, which puts 1962 in range for being a "representative season" per this phenomenon.

Now: let's go back to the "dawn of time" for this data (or--as noted above--as close to that dawn as we can get) and look at those hitters who had 30+ RBI in a month during the 1901 season.

That list isn't too shabby: three Hall of Famers, two highly accomplished hitters, and only one ringer in Kitty Bransfield, whose career (and his performance level in September 1901) was decidedly below the levels achieved by the others. But of course it's Honus Wagner who puts all of the others to shame with a truly epic RBI performance--though kindly note that Delahanty, Lajoie and Sheckard all hit over .400 with an OPS+ in excess of 1.100.

Still--Honus' RBI total is eye-popping, and wouldn't be exceeded until 1930. Looking at the game logs for September 1901, we see that the Pirates had a hot road trip early in the month that included six games (three consecutive doubleheaders!) in the Polo Grounds against the New York Giants (not yet under the management of John McGraw, and a team that finished seventh that year). In those games, Wagner drove in 18 runs, a bit more than a third of his total for the month. (The Giants were Wagner's whipping boys in 1901: he hit .466 against them overall, and .500 in the Polo Grounds.)

As the chart shows, it will take 13 years (and an extra league) to exceed the number of 30+ RBI/month incidences.

Now, in order to tie things back to our primary project, let's look at the 30+ RBI/month guys for1962. Dodgers and Giants players are shaded in the darker shadow of yellow...

No, that's not a mistake--and yes, we're messing with you. You'll have to guess who the player with 41 RBI in a month is. But as you can tell, he's a Dodger or a Giant. And while we've obscured most of the data, you can tell by the OPS that it was a helluva month.

Posted by Near-Genius Nephew at 6:56 PM