Our two teams resumed a dual-win day on Friday, April 27, 1962. Back at home in Candlestick Park, the Giants were on the defensive from the very first batter in the game when traveling man Bobby Gene Smith--just acquired by the Cubs in a trade with the Mets--hit a home run (the only one he'd hit for Chicago, who would soon trade him to the Cardinals).

Trailing 4-2 in the seventh, Al Dark sent Willie McCovey up to pinch-hit after Jim Davenport had reached on a two-out error by the Cubs' shortstop, ex-Giant Andre Rodgers. McCovey promptly blasted a game-tying homer off luckless Cal Koonce. 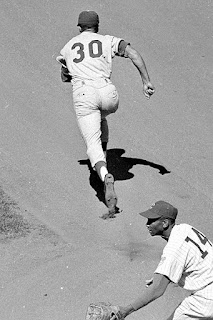 In the ninth, Dark made a far more curious decision, permitting reliever Stu Miller to bat in with a runner on first in a tie game. Naturally, Miller (a lifetime .133 hitter) singled, setting up Chuck Hiller's walk-off sacrifice fly. (Maybe Dark thought that the team's luck would jell if he preceded Hiller with Miller...and so it did.) Final score: Giants 5, Cubs 4.

Down in LA, two plus-sized pitchers (the Dodgers' Don Drysdale and the Pirates' Bob Veale) squared off, though it quickly became no contest. Veale was wild, walking the first three batters he faced, and the Dodgers showed off a feature of their offense that would become more prevalent later in the year when Maury Wills and Jim Gilliam executed a double steal. Frank Howard's two-run single followed shortly thereafter, and was the key blow in a three-run first for the Dodgers.

Veale was knocked out in the bottom of the fourth as LA fashioned four singles and two scoring ground balls into a four-run rally, taking a 7-1 lead. Drysdale scattered 10 hits and went the distance, facing 37 batters and striking out seven. Wills' two steals brought his season total to six. Final score: Dodgers 7, Pirates 2.

Posted by Near-Genius Nephew at 12:01 PM