YOUTH NOT BEING SERVED IN EARLY 2016 BASEBALL LINEUPS

Years ago we demonstrated that youth movements aren't quite what saber types (post, neo, crypto, gonzo, klepto...) like to think they are. And in 2016, the purportedly "massively influenced by analysis" executive suite personnel in MLB seem to have taken us to heart (subliminally, no doubt), 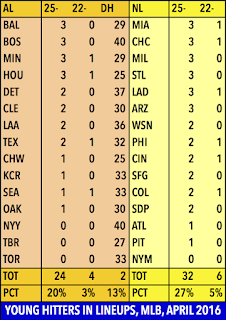 The table at right shows the number of young batters in the early starting lineups of 2016 teams (25-, age 25 or younger; 22-, age 22 or younger) and it's all summed up at the bottom. We divided by 8 slots for both leagues to account for the fact that the DH strongly tends to be filled with hitters above the age of 30 (and ten of the fifteen AL teams, in fact, do just that: the average age of the current starting DHs in the AL is 32.1).

We haven't checked lately (as you know if you've come around here of late, we haven't been doing much of anything baseball-wise lately...) but it seems quite likely that these numbers represent a dip from years past--particularly in the AL.

There are no bonafide "youth movements" to be found anywhere: the best scores are just under the threshold of 40%.

This is a cruder measure than adding up the young hitter PAs and dividing by total PAs, but we've found that the values are not too far apart. Right now, youth is not being served...
Posted by Near-Genius Nephew at 9:34 AM