Two complete games kick off the quest for a season with a CG total in mere double figures...

...and both CGs were superb, 60s-style high-strikeout shutouts.

First, the Cardinals' Jaime Garcia (the type of quality lefty who should be facing the high-flying Cubs...) mowed down the Milwaukee Brewers with a 13-K, one-hit shutout. The lone hit allowed by Garcia was a sixth-inning single to Brew Crew right fielder Domingo Santana. 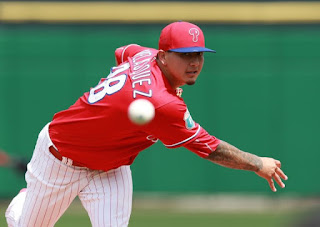 Next, Vince Velasquez continued to impress his new team (the Philadelphia Phillies, who acquired him over the off-season as part of a deal that sent reliever Ken Giles to the Astros) with a three-hit, 16-K whitewashing of the San Diego Padres. Velazquez' big K total vaulted him into the early lead in that category--so far, he's fanned 25 in 15 IP.

Both of these initial CGs were home games. Last season only 43 of the 100 CGs with 8 or more IP occurred at home, a figure that's a bit surprising...we may have to go back and look at the home/away wrt CGs one of these days.
Posted by Near-Genius Nephew at 8:13 AM