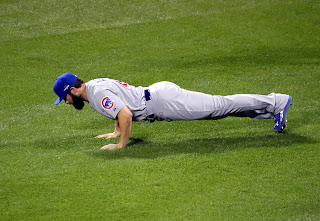 It took six days, but CG #4 was about as media-heavy as any such event could be, given that it was Jake Arrieta (the man whose Faustian bargain is currently in its "nothing but blue skies" phase...) bringing a no-hitter to the table as the churn-and-burn Cubs laid waste to a lefty (Brandon Finnegan, who'd baffled them earlier in the year) en route to a surreal 16-0 win.

Arietta was not as sharp in this game as he was in last year's Dodger Stadium no hitter (or as he'd been in a couple of his other starts in 2016), but the Reds conjured up an especially limp performance, led by the slumping Joey Votto (now 0-for-19 in his past six games). Perhaps the shock of the ongoing pile-on that the Cubs engineered in the late innings simply turned them into automatons...

Department of redundant randomness department: this year CGs have seemed to become events involving exceptional, low-hit performances...you know, ones that grade out well on Bill James' Game Score method. Oddly, Arrieta's ultimate low-hit performance actually grades out lower (GS of 89) than the other three CGs this year; so far, CGs are all shutouts, involving performances where pitchers have given up no more than three hits in a game. In their 36 CG IPs thus far in 2016, CG pitchers have allowed just six hits, walked five, and racked up 44 K's.
Posted by Near-Genius Nephew at 8:29 AM