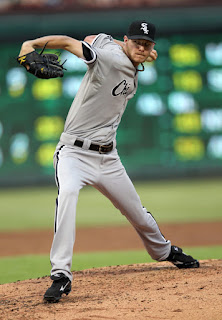 Another low-hit gem featured prominently in the third complete game of 2016 as the White Sox' Chris Sale tossed a two-hit shutout at Tropicana Field in a 1-0 win over the Rays.

Sale improved his early season record to 3-0 with the victory, striking out nine and walking none while lowering his ERA to 2.35. The Rays only managed to get one baserunner into scoring position during the game.

Jimmy Rollins' heads-up baserunning gave the White Sox their chance to score the only run of the game in the ninth inning.

Unlike last year, when a spate of complete game losses were prominent in the early going, the CGs posted thus far are all shutouts
Posted by Near-Genius Nephew at 7:14 AM