SWINGING BACK TO SWINGING AWAY

Teams don't usually go to the World Series when their offense doesn't take walks. However, virtually nothing in life (or baseball) is monolithic; and when offensive levels drop, one starts to see instances where rules of thumb not only don't apply, they've had a hammer applied to them.

And that brings us back to the Royals. Ironic in the extreme, is it not, that the team long favored by two saber-rattlers and one sicko-phant has achieved its recent measure of success (which continues into the second month of the 2015 campaign) by eschewing the base on balls. Of course, in this cockeyed caravanserai of a world, you take what you can get, but it twitches the corners of our mouth to see success meted out in contradiction to so many loudly proclaimed declaration of principles (you know, the kind that princely puff-adder Charles Foster Kane used to bloviate about...) and so little said about it. (People really are in a "sweep it under the rug" state of mind these days, ain't they?)

The Royals were one of three AL teams in 2014 who were in the thick of the playoff hunt despite taking walks only when absolutely necessary. (The other two teams were the O's and the M's, the latter just falling short of sparing us the incredible post-season run that the Royals have yet to come down from.) Both the Royals and the O's played around .500 ball in games where their batters drew 0-1 BBs, and they played far more of these games than the league average: the O's played 55 (29-26) and the Royals (not to be outdone) played 65 (32-33). The MLB average for 2014: 42 such games and a 16-26 record.

The two teams mitigated the large quantity of these games via extreme totals in various offensive categories. The O's hit 66 HRs in their 55 0-1 BB games last year; next closest to that were the Rockies, with 54 HRs in 56 such games. The Royals stole 62 bases (out of 75 attempts) in their 65 nolo  contendere "pass on the free pass" contests, which was not only more than double the total of any other AL team in 2014, but also represented a significantly better success rate than in their other games (82% as opposed to just 66% in all 2+ BB games). 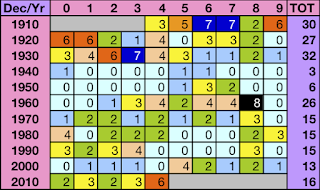 Flukish stuff? Could be. But the trend in the game, for better or worse, is shifting back to free-swinging teams. We can see this in the riotous table at left, which shows the number of teams with 50 or more 0-1 BB games on a yearly basis since back in frickin' 1914, where (as everyone knows) if Archduke Ferdinand hadn't taken a walk, we might have never had any of these wars we seem to have become so fond of, eh?

That number has ebbed and flowed, and has occasionally played "Ebb Tide" in the wee hours when it thought no one was awake; you can see that in the 40s teams all seem to know how to keep their bats on their shoulders--a trend that was reversed in the 60s, leading to that frightfully anemic year--1968--where the expanded strike zone nearly made walking illegal (8 teams with 50+ games with 0-1 BB--and MLB had only 20 teams that year, which means 40% of the teams behaved that way, as opposed to just 20% last year--six out of 30). 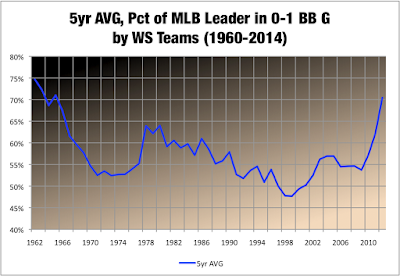 While things aren't quite so out of whack today as they were in 1968 (and don't get us started...), it's clear that the climate is making it possible for teams to swing away and not suffer the usual consequences.

Another way to measure this is to see what the running percentage relative to the top team in 0-1 BB G is for the teams that make it to the World Series. We ran this data for the years 1960 to the present, and that chart shows that most of the time, teams that get all the way to the Fall Classic have somewhere between 50-60% of the league leader in 0-1 BB games.

But, as you can see, that percentage of the leader is rising sharply of late. The Royals, who (of course) were #1 in such games in 2014, had a sizable impact on this chart (you can see the sharp upward movement at the right). If they make it back to the World Series this year with another league-leading figure in low-walk games, they might push the chart past the maximum (set all the way back in 1962).
Posted by Near-Genius Nephew at 10:57 PM