We didn't expect CGs to languish forever, even in a year that featured an exceptionally slow roll-out of the "dodo bird" of pitching feats. We suspect that it will still be a down-to-the-wire proposition for the "magic" barrier of one hundred. 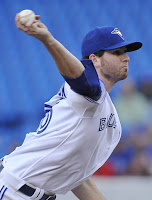 And the total is now up to eighteen thanks to three CGs on May 25 and the second appearance on the list by Felix Hernandez on 5/27:

--Drew Hutchinson of the Blue Jays four-hit the Chicago White Sox in a 6-0 Toronto win, striking out eight and walking no one. 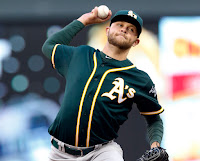 --Jesse Hahn of the A's four-hit the Detroit Tigers in a 4-0 Oakland win, striking out five and walking one.

--Dallas Keuchel of the Astros added another CG loss to the 2015 ledgers as he threw an eight-inning CG while losing to the Orioles, 4-3.

--Felix Hernandez, locked in a pitching duel this evening with the Rays' Chris Archer, caught a break when the Tampa Bay relievers coughed up three runs in the top of the ninth, allowing Hernandez to coast in with a four-hit shutout in a 3-0 Mariners victory. Archer struck out more men (12 in 8 IP as opposed to Felix' eight) and gave up less hits (just two to Felix' four) but, as is sometimes the case--sometimes?? maybe we should try to measure that, eh??--he has nothing to show for it aside from some Wins Above Replacement trading stamps.
Posted by Near-Genius Nephew at 11:56 PM