A quick chart to "set the table" for a look at the distribution of innings pitcher in starting pitcher outings over most of baseball history. (We await with baited breath Retrosheet's relentless "backwards march" into the nineteenth century.) 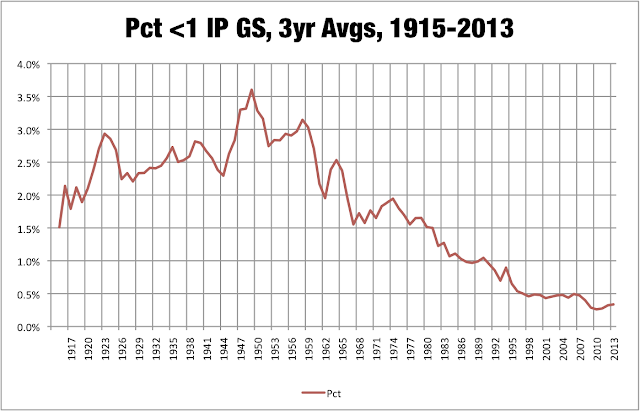 We present here the percentage of starts over time (in running three-year averages) where the pitcher was pulled from the game during the first inning. As you can see, it's another "decline and decay" chart (as we've been demonstrating, there seem to be a million of these...) where the incidence is now nearing zero.

After WWII, though, you could almost say there was a strategy built around what we might call the "ultra-quick hook." Back then, teams carried nine pitchers (nine--can you believe it?) and what came out of that was the idea that a starting rotation could be altered due to the results in a single game: if a pitcher was pulled in the first inning, he could come back on two or three days rest and shift the rotation around accordingly. 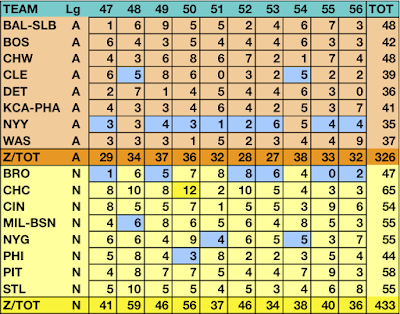 But, as our table at right demonstrates, this was not an innovation based on "market inefficiency" or any other similar precept. It was barely a strategy and more an ecological necessity; it did get used more in the NL than the AL, but not notably so; and only two pennant winners in the period covered (the so-called "golden age of the ultra-quick hook") were league leaders in the category (the Dodgers and the Yankees, in the same year--1953).

The highest incidence for a single team? The 1950 Cubs are the highest in the timeframe depicted by the table, with 12, but the record is 14, by the 1928 Boston Braves, who were (mostly) managed by Rogers Hornsby and posted a 50-103 record that year.