If you go to the Play Index at Forman et fils and query for 2015 CGs using the Pitching Game Finder, you will currently find a total of 11 CGs. However, in our headline, you see us noting the occurrence of CGs #8 and #9. What gives?

It's this: CGs are given in any game that ends after it has become an official game (technically, four and a half innings). That doesn't happen often (and happens much less than it used to--one day we'll put up a chart detailing the number of CGs that are less than eight innings in length). 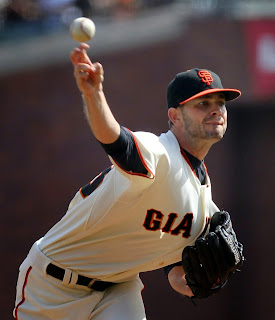 But to our mind these are not CGs at all, but flukes of circumstance. We don't count them when it comes to tracking the record for least number of CGs; they don't represent a pitcher going the full distance, even if they are the only pitcher appearing for their team in that particular game.

So that's why we ignore and dismiss the CGs awarded to Brett Anderson of the Dodgers and Eddie Butler of the Rockies on May 8th, in a five-and-a-half inning game at Coors Field shortened by rain.

We do recognize Jered Weaver's six-hit shutout of the Astros on that same day, however. (Weaver's team, the Angels, won 2-0.) Jered threw 120 pitches, an astonishing number these days. Only the Reds' Johnny Cueto has thrown more in a game thus far this year.

And we also recognize the Giants' Chris Heston, who two-hit those same Astros and fanned 10 in a game won 8-1 by his team, the San Francisco Giants.

Which would absolutely shatter the record for fewest CGs in a season.
Posted by Near-Genius Nephew at 4:52 PM