STILL NOT PROMISIN', BUT: QMAX "EXTREMES" CHART THRU APRIL 18...

The earlier chart got us to thinking...and you know what THAT can lead to. (Cue soundtrack of stampeding cattle...)

The extremes in starting pitcher performance are the areas of great interest--they have tended to get fetishized in formulations like Game Scores, however. Which is why we've always proselytized for the probabilistic approach in QMAX (short for Quality Matrix), where even great hit prevention is not a guarantee of a win. It's the real-life look at results, without any overdetermination.

Which brings us back to the earlier chart and how it can go further in summarizing the information that QMAX brings to bear on all this. It's simple enough to add in the "bad" performances  (the "hit hard" games, the ones in the "6S" and "7S" range of the QMAX matrix chart). When we do that, we've got a snapshot of those games that are almost--but not quite--"automatic" wins and losses when they occur.

So here's the expanded chart...we'll do as much explaining as possible below. (You're going to have to click on it to get the full "experience"...) 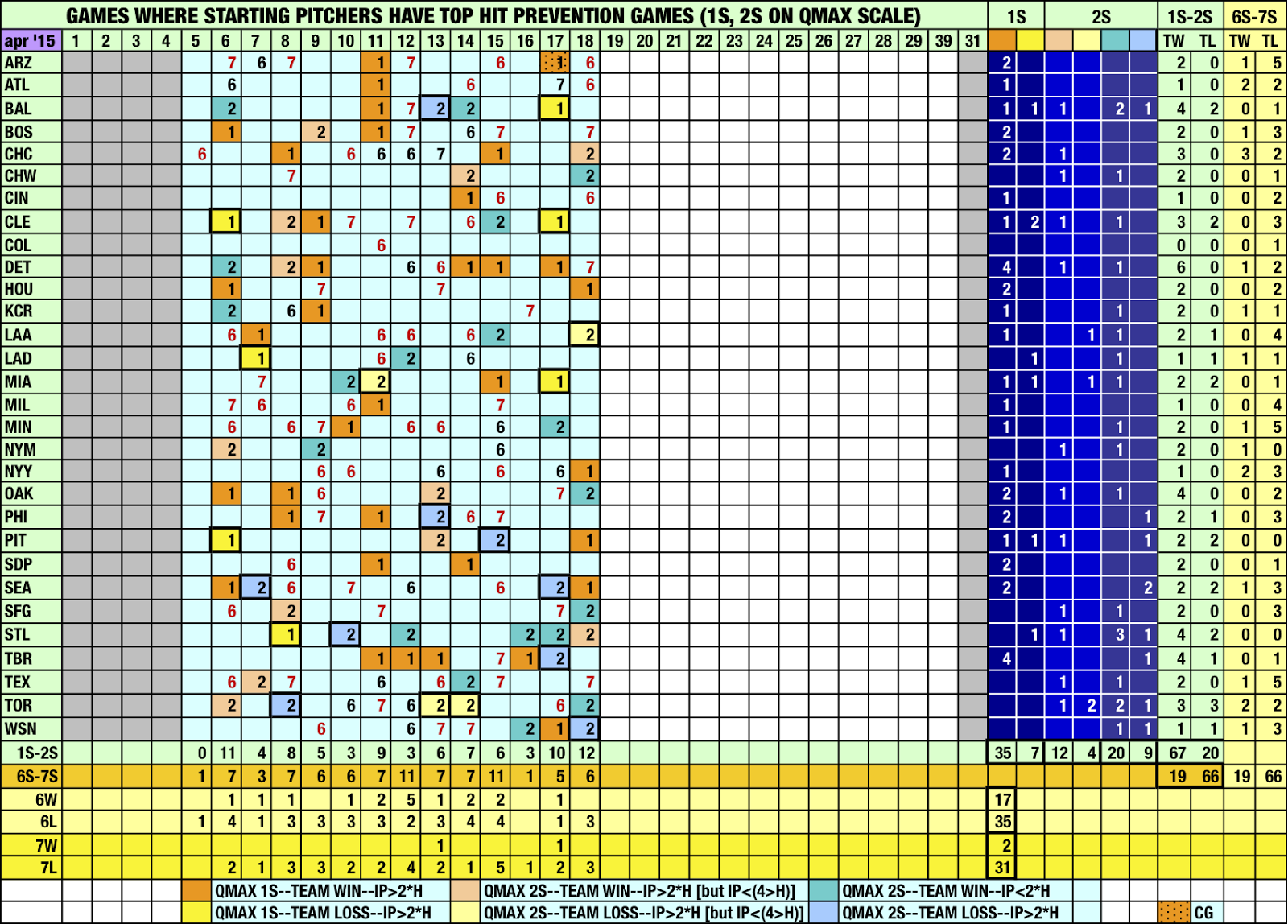 So what's added to the earlier version are notations for the "hit hard" games, the "6's" and "7's"--when the numbers are shown in black, the team managed to win the game despite the poor starting performance; when in red, 'twas a loss. And the data shown across the bottom--a running count of wins and losses in "6S" and "7S" games--shows what we've told you about these regions for years now: teams can still win about a third of the games where the QMAX "S" score is a "6," but it's much, much harder to win when the score is a "7." (And now that we are back in a lower-scoring era, it's gotten that much harder: in 2009, the overall team WPCT for "7S" games was .140, while in 2014 it was .095 (and in the early going this year is even lower, at .063).

If you look at the totals (summarized in the juxtaposed green and orange boxes near the lower right of the chart) you'll see that there is a very close balance between "top hit prevention" games ("1S" and "2S" on the QMAX chart) and "hit hard" games ("6S" and "7S").

Remember that "1S" and "2S" games that result in losses for the team have the heavier box display, and you can track all of this action team-by-team as the games pile up, day-by-day.

You might be surprised to discover that the Orioles (not thought of as a team with strong starting pitching) have the most "1S" and "2S" games thus far--along with the Cardinals and the Tigers. (And Detroit has managed to win all of those "top hit prevention" games thus far...which is not something that can continue indefinitely.)

The chart also shows that the Cubs have managed to beat the odds in "6S" and "7S" games in the early going, winning three of five such games when the overall winning percentage is less than .250 in the "hit hard" region.

We even found a way to display complete games, and if you look carefully you find it. (There's still only one.)

Now will we be able to keep this up all year? Who knows...but feel free to check up on it as the season plays out.
Posted by Near-Genius Nephew at 1:03 PM