NOT PROMISIN', BUT: 2015 QMAX TOP HIT PREVENTION SCORES DAY BY DAY, BY TEAM

What that title means is that we aren't promising to keep this up the whole damn season, at least not without some automation (or, perhaps, locomotion...) from some of our auto-didact associates.

But, for now, here it is--a way to see when the best starting pitcher performances (according to the Quality Matrix aka QMAX) occur. 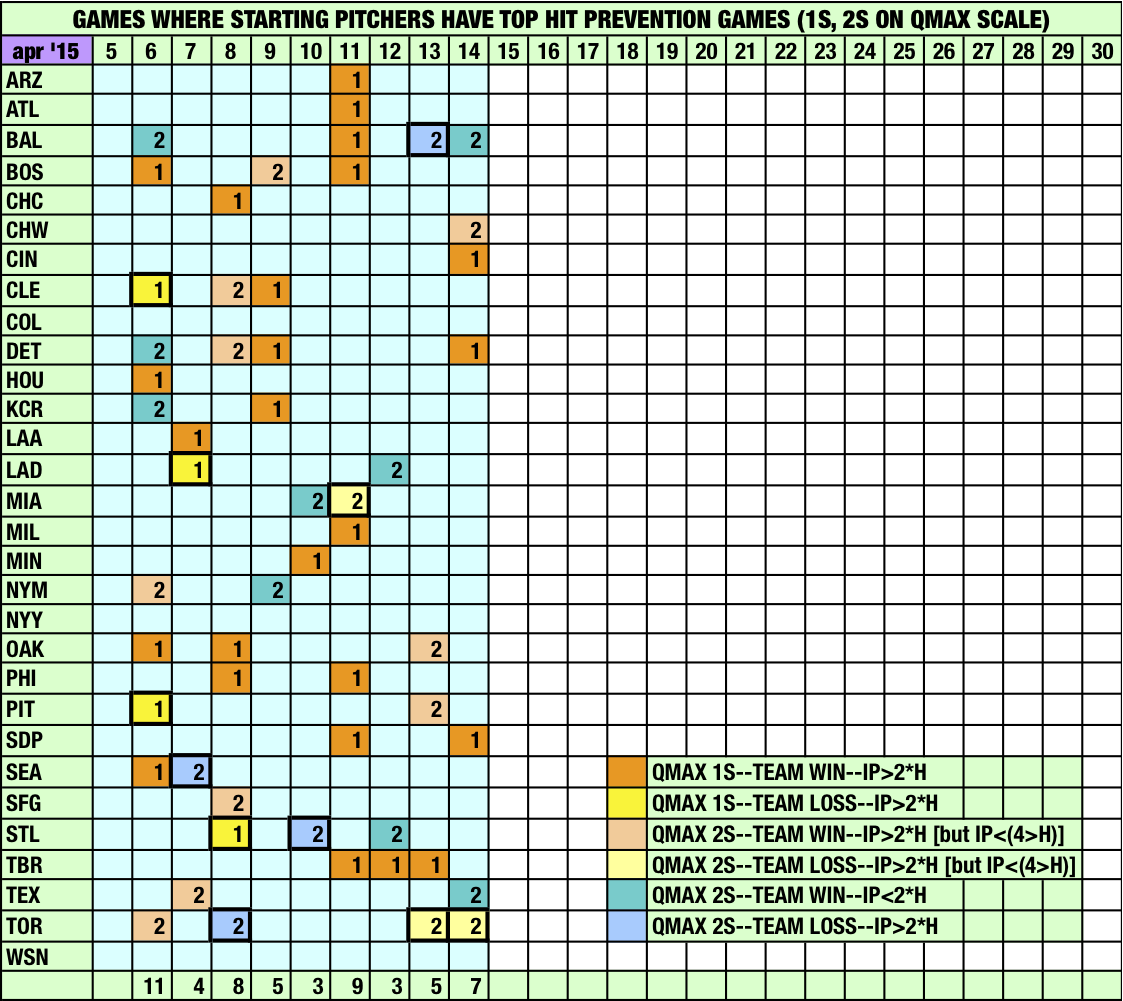 Some explanations: 1) the squares with the extra-bold borders are for those games in which the team lost: at this level of performance, they are (of course) much rarer and thus don't overcrowd the chart;

2) why do we break out two types of "2S" game here...well, that's because an alternate formulation of the QMAX matrix runs in parallel with the one chosen so many years ago to be the basis for the method, one that creates the breakpoints based on the ratio of IP/H as opposed to simple subtraction (IP-H, with adjustments for extra-base hits).

We discovered that the overlay allowed us to further test the probabilistic validity of this model...and this shows up in the 2S range as sorted between IP/H levels. The 2S games where IP>(2*H) produces higher team winning percentages (just over .750 over many years of data, and 8-2 in the 2015 data thus far); while the 2S games where IP<(2*H) have a winning percentage around .640 and a 6-4 record.

Of course, the chart can be enjoyed for simply displaying the top games by team, by day. You could also add all the other "S" scores on it, and make it into an overwhelming piece of visual data--and, if you're not nice to us, that's just what we'll do.

Now if we could keep this up, we could see which teams have the worst luck in their top hit prevention games--another item in the game subject to randomness that would add some detail to why there is variation between projected and actual WPCT. Every little detail is worth tracking, n'est-ce pas?
Posted by Near-Genius Nephew at 11:20 AM