Fifty years ago today, much of America was glued to its television sets in the aftermath of John F. Kennedy's assassination, which had occurred the day before. Events would soon become even darker: the following day, the alleged assassin, Lee Harvey Oswald, would be gunned down on national television (an event slightly more trauma-inducing than today's "wardrobe malfunctions"). 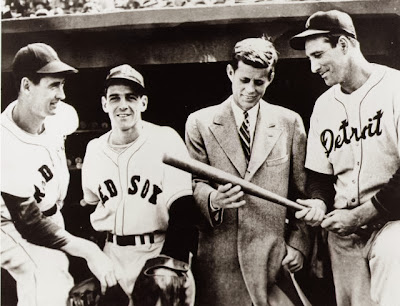 In honor of a man taken well before his time, here's a photo of the young JFK as he meets with three baseball players prior to Opening Day at Fenway Park (April 22, 1946). This is a freely available photo and many of you might have seen it at Forman et fils, under the name of the obscure ballplayer in the shot, whom we'll get to in a minute. (A nit: the caption for the picture as shown at Forman et fils references JFK as "Senator," which was not the case when the photo was taken: Kennedy would make his first run for the House of Representatives in the fall of 1946, so in this photo he is still a private citizen.)

JFK hasn't quite filled out in the photo--he looks more like a singles hitter here than would be the case when he occupied the White House, where we see a somewhat fleshier version (possibly due to the regime of medication needed to keep his hidden condition--Addison's Disease--under control).

Two of his three companions in the photo are also all-time greats: Ted Williams (left) and Hank Greenberg (right). The player on JFK's right, however, is a footnote. He is Eddie Pellagrini, who was a 28-year old rookie shortstop for the Red Sox that year. Like Kennedy, he was a Boston native, and this was his first game at Fenway as a member of his hometown team.

There was something of a storybook ending to the proceedings at Fenway that day, possibly influenced by the presence of the future President. Pellagrini replaced Red Sox starting shortstop Johnny Pesky in the fifth inning, who'd been hit by a pitch from the Senators' Sid Hudson. In the bottom of the seventh, in what was his first major league at-bat, Pellagrini homered off Hudson with what proved to be the winning run in a 5-4 Red Sox win. 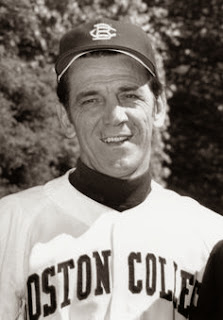 (We tend to either gloss over or sugarcoat these moments, not quite able to reconcile the events on the field with the individuals who make them happen. Professionals are supposed to downplay their feelings, after all. But a moment like this must have been heady indeed, particularly for a 28-year-old rookie still rusty from four years away at war and knowing quite well that he was in all likelihood the most expendable man on his team's roster.)

Eddie P's future in MLB would not be so spectacular (or so tragic) as the man with whom he's photographed. Unlike JFK, he couldn't hit the curve ball. He was shipped to the St. Louis Browns after the 1947 season, went back to the minors, and played for three more NL teams as a utility man.

But his post-MLB career was distinguished. He would return to his hometown in 1957, becoming the baseball coach at Boston College, a position he held for 31 years, which included three appearances in the College World Series.

Interviewed shortly after his retirement in 1988, on the 25th anniversary of JFK's assassination, Pellagrini recalled the moment captured in the photograph. He remembered Kennedy's toothy smile, that he was put into the picture because he was a "Boston boy," how unusual it was to be in a photo with a future president. "It all happened so fast," he said. "In the blink of an eye. It makes me sad to think that it only took about the same amount of time to end a man's life."
Posted by Near-Genius Nephew at 8:22 AM