If you've not read about the (still changing) concept of the Ptolemaic MVP, you can get some (hopefully) useful background here. We are still tinkering with the method, and had hoped to be able to spend more time adjusting, expanding, and refining this year, but that just wasn't in the cards. (We'll discuss a bit of what we're planning to introduce as we move it forward for 2014.) 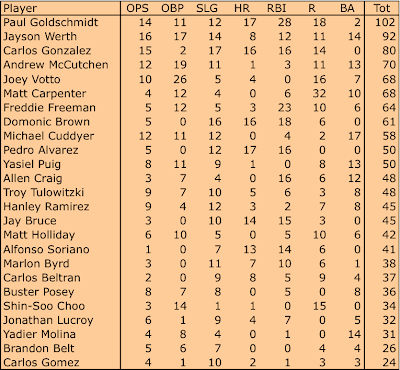 The nickel tour of what the Ptolemaic MVP is about is as follows: two-month snapshots of offensive data are captured, ranking points assigned to three counting stats (R, HR, RBI) and four rate stats (BA, OBP, SLG, OPS). We capture this data anywhere from eight to one hundred and twenty times (the latter extreme requiring  automation that has yet to be implemented...) and add up the points, and voila! You have your MVP based on the agglomeration of many "peak" performance measures. 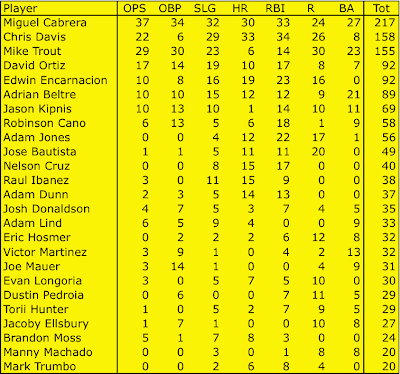 Now there are some problems with using the raw data, as any numbers person will be only too glad to tell you. Clearly some kind of park factor adjustment is needed, though not as much as what's used in the player value calculations at the high-visibility numbers sites.

There are some weighting issues for the stats used to create the point rankings that need additional attention. We'll go through one example of that below, using the inevitable comparison between Mike Trout and Miguel Cabrera as the basis for it.

What we have in the current Ptolemaic MVP method is something that is more likely to capture the thinking process of the BBWAA (though this year, we suspect it will be less accurate in its prediction than was the case in previous efforts).

So, first--the Ptolemaic MVP results for the two leagues. We've shown the top 25 for each. There are problems here, fo' sho'. Expect Yadier Molina to be much higher than he shows here: a positional adjustment is clearly also needed. (We'll need to tinker with past results and look for reasonable values for such add-ons, in the way that Bill James did it for the Hall of Fame Monitor etal.)

The consensus seems to be that Andrew McCutchen, who finished first in the Ptolemaic NL MVP race last year but third in the official voting, is going to take it in '13: he ranks fourth on our list. (Some of that is ballpark--with some adjustment for Coors Field, it's likely that he's going to be ahead of Carlos Gonzalez.) It's clear that the HR-RBI points as deployed are working in the favor of sluggers: Paul Goldschmidt, ranked first in the NL Ptolemaic MVP "voting," outpoints McCutchen 45-4 in those categories, which certainly looks to be a distortion.

In the AL, we don't expect Chris Davis to finish higher in the actual MVP vote than Trout, whose singular combination of skills is well-known to the voting populace by now. How much better known it is will be interesting to determine as he goes up against Cabrera for the second consecutive season. 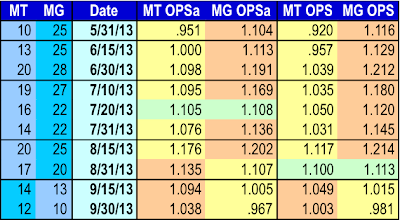 One thing the Ptolemaic system can do is adjust SLG (and, by extension, OPS) by factoring in net stolen bases and double plays into equation. (We think that DPs should "half-weighted" in the formula because we are taking so many snapshots.) The chart at left shows Trout and Cabrera's point scores for the ten snapshots we took this year (we wanted it to be more, and we've figured out a way to easily do at least three to four times more of them in '14), followed by a comparison of their adjusted OPS (factoring in net SB and DP into SLG) with their standard OPS values. Trout gains a lot of ground when we make this adjustment, and he winds up ahead of Cabrera in adjusted OPS (OPSa) in one additional snapshot.

We didn't try to adjust the point totals this time, but we expect that if we had, Trout would have climbed over Davis and would have gotten a good bit closer to Cabrera.

We will work it some more and return to this in '14. What we expect to see tomorrow is a slightly closer race between Cabrera and Trout in the AL, and a close race between McCutchen and Goldschmidt in the NL, with the winners being the players on the playoff teams.
Posted by Near-Genius Nephew at 6:18 PM