If you've been hanging around the world of baseball numberology for any length of time, you already know that the "age 27" season was identified by Bill James as the most likely year in which hitters have their peak season.

As long as this sabermetric chestnut has been around (and it's going on three decades), we must admit that we've never seen a list of the best age-27 seasons. James compiled some positional "All-Star type" teams organized around age back in the Abstract days, but that was a long time ago.

What prompted this was the stellar first half of the 2013 season that has been turned in by the Orioles' Chris Davis, who is (as would seem to make sense since we are mentioning him) having his age-27 season this year. 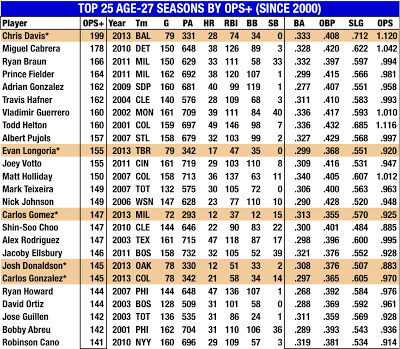 We did a little rooting around in the Forman et fil Play Index (remember, kiddies, it's not a free service, but it's well worth it...) and came up with the following list of age-27 seasons...this one is sorted by adjusted OPS (aka OPS+) and covers the seasons from 2000 to the present.

The chart shows you what we would have told you without the chart--namely, that Chris Davis has just been ripping things up thus far this season. (In fact, nothing other than the age-27 peak season scenario could have remotely prepared anyone for the type of season Chris has been turning in.

The top 25 age-27 seasons since 2000 (the five players from 2013 who are currently on the list are shown in orange) seems to break down into two types:  bonafide great hitters (Cabrera, Braun, Fielder, Guerrero, Pujols, Votto, A-Rod, Ortiz) and guys who packed their "career year" into their age-27 season (Hafner, Johnson, Choo, Ellsbury, Guillen). Most of the latter are folks who just skim their way into the lower echelons of the list--all of which makes Davis's performance so unusual.

But then we got to thinking. Assume for a moment that Davis manages to hold his 199 OPS+ level for the entire '13 season--where would that place him on the all-time age-27 list from all the way back in 1901. (In short, all of the twentieth century as well as the twenty-first.) Just who did have the greatest age-27 season?

You are probably not going to be surprised to discover that the answer to that last question is...Ted Williams. 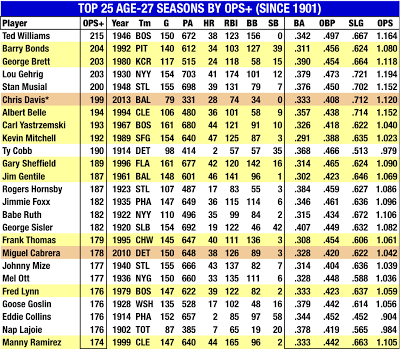 And you are probably not surprised to discover that fourteen of the twenty-five players on this list are in the Hall of Fame. (#2 on the list--Barry Bonds--is a guy who's clearly going to have to wait awhile.)

So we've had about half of what is clearly a historic season from Davis.

But note that he's the only hitter from '13 who makes it onto the all-time Top 25.

And note also that there are now twelve players from post-expansion days (1961 on) who've made the Top 25 age-27 list--but there are only two hitters (Davis and Miguel Cabrera) on the lists for seasons turned in since 2000.

It's going to be interesting to see what Davis's numbers look like at the end of the year--will he still be on this list? If he is, he'll be one of the great "mystery guests" of baseball history.
Posted by Near-Genius Nephew at 11:10 PM