WHAT THE F*CK HAPPENED TO THE FISH...AND THE ASTROS???

Damn it, this is no fun...no fun at all. Is it gonna be one of those beisbol seasons where we are hoisted by the boring petard of mediocrity and competitive balance? Can't we at least have a couple of teams--hell, even one team--that's either superlatively good or shockingly, swear-word-inducingly bad?

At the end of May we didn't have a lot of sensational excellence to self-galvanize about, but we had the Fish and the Astros--two teams that looked like they were on their way to seasons that would place them as deep in the toilet as anyone had been in a decade. Teams that win less than 50 games are so freakin' bad that they need to be cherished in spite of themselves; heading into June, it looked as though we had a clear shot for two of these teams in the same year (data that we already ran for you back when we were getting the parade permits in place...along with the Facebook pages and other social media doodads guaranteed to get out the folks in those cities to celebrate this achievement in style--aka a few hundred thousand rotten eggs reaching the hands of those in position to hurl them with impunity).

But, Crissakes already, these two teams suddenly found wheels for their wagon, and have spent most of this month actually making lemonade out of lemons, wine out of water, and Latin phrases out of ix-nay. 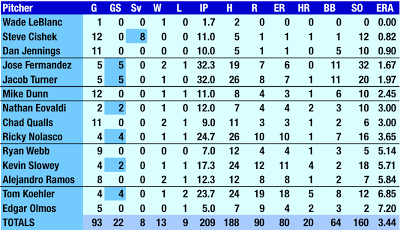 Now this is something to write your g-d Congressman about. It's one thing to strike down portions of the Voting Rights Act via a claim that its nearly half a century later and those states are now merely trying to suppress African-American votes instead of actually doing so, but it's beyond the pale when a couple of teams that are supposed to make rotten eggs smell clean and fresh by comparison start regularly beating up on the competition. 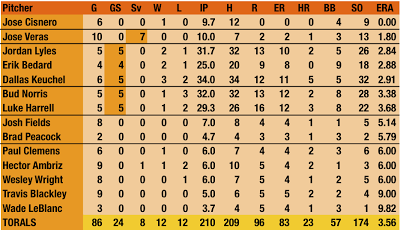 So how the f--- are they doing this? We decided to crank up David Pinto's handy Day by Day database (not quite rendered moot by the latest "features" agglomerated by the folk at Forman et fil) to determine how these two squads could push themselves to a combined winning record.

Pitching charts first--because this, as some of you probably suspected, is the place where the Fish and the Astros have made their most significant performance improvements in the past four weeks. As you'll see, both teams suddenly have functional rotations and each has its closer operating at full cylinder. 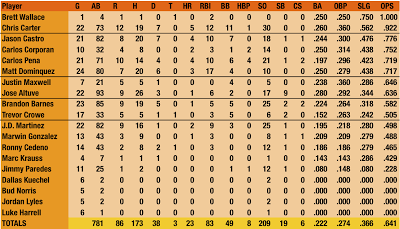 The Fish seem determined to cash in Ricky Nolasco, their highest-paid player and someone who has no  fear of making with the middle finger when it comes to his boss, Jeffrey (The Toad) Loria. Right now the key components of their bullpen (Steve Cishek, Dan Jennings, Mike Dunn) have been getting the job done. The team's ERA over the past four weeks is fifth best in the NL.

Can that last? Some of it will. Jose Fernandez is looking like an ace. Jacob Turner, despite not being all that overpowering, looks like he can pitch. But everyone will soon be worrying about their workloads, because they are both very young.

On the hitting side, the Astros are hitting more HRs than the Fish, but Miami did finally get Giancarlo Stanton back, along with Logan Morrison. These two guys, along with journeyman Ed Lucas, have made the Marlin offense just good enough to support an improving pitching staff--at least for the month of June. 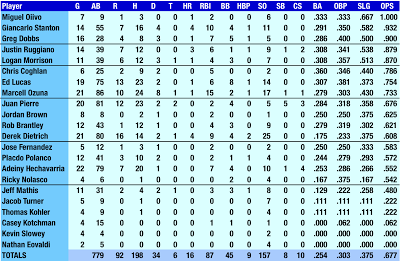 Chris Carter is currently Da Man for the Astros: he's always been a contender for baseball's Human Wind Machine contest. There's not much chance that the rest of the guys who are managing to deliver some clutch hits right now (Matt Dominguez, Jason Castro) are going to keep it up.

Keep in mind that these two teams have had to push their way into .500 ball in order to make 100 losses something other than a foregone conclusion.

We're still figuring on mid-to-high 50s for these teams' final win totals. If one of these teams is likely to escape a hundred losses, it's more likely to be the Fish, as they seem to have managed to put together a more balanced pitching staff and a somewhat better middle of the lineup.

But all this positive performance is, frankly, just the kind of bummer in the summer we were hoping avoid. (It's too late on that score for Arthur Lee--and Carlos Lee, too, for that matter.) Why the hell couldn't these teams have done what the Brooklyn Dodgers used to do--namely, wait 'till next year?

It's enough to make a grown curmudgeon cry...
Posted by Near-Genius Nephew at 11:47 PM