HIGH WORKLOAD RELIEVERS AND THE "YEAR AFTER"/1

In the sabermetric history of the game, a great deal of emphasis gets placed on the changing usage of the bullpen. As is usually the case, that emphasis veers away from historical understanding and toward what we like to call the "Silhouette Theory" of baseball analysis (as typified in the title of the famous song sung by the legendary and long-forgotten doo-wop group of the same name: "Get A Job").

Be that as it may (and may it evolve past that at some point before baseball theory becomes nothing other than self-caricature), pitcher workload structure--for lack of a better term--has changed a lot in the past six decades. Starters throw fewer innings, there are more highly defined roles in the bullpen, and there is precious little evidence that any of this actually protects pitchers from injury or has anything to do with the changes in offensive levels (either up, beginning in 1994, or down, beginning in 2008).

It's a complicated matter, to be sure, and our lil' ol' blog is not the place to get you bogged down in the particulars. What we can do is take a look at certain aspects of the issue in a manner that might show some long-term historical trends. 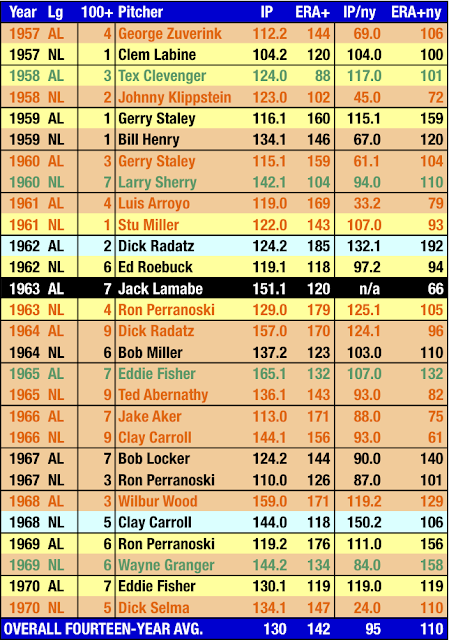 And that's what this little series will do. We will present it in four parts, showing what happened to relief pitchers who led their league in relief IP in the year after that feat. (Note that these pitchers are not always the best ones in that given year; but the quality level in the high workload season is usually quite high--it will get higher as the workload levels decrease over time.)

What do we see in this list? The raw numbers tell us that the twenty-eight workload leaders (as shown on the chart at right) threw an average of 130 IP in their workhorse year, and dropped off to an average of 95 IP in the next year. (That's an average workload dropoff of 28%).

They also tell us that the quality of their work took a serious nosedive as well. (Whether this is "regression to the mean" will be worth a semi-lively discussion by those who are part of the "Silhouette Theory" school of neo-post-neo-sabermetrics; we are going to remain agnostic on that issue for the moment, particularly since we are only posting the first 25% of the data results at this time.) The average ERA+ for these workhorse relievers in their heavy workload year was 142; the next year it dropped 23%, down to 110.

The pitchers whose ERA+ went up in the following year are shown in green type. None of these pitchers (Tex Clevenger in 1958, Larry Sherry in 1960, and Wayne Granger in 1969) had exceptional ERA+ values in their workhorse season: they are all under the average ERA+ for the group.

Twelve pitchers had a greater decline than the aggregate in both IP and ERA+; they are shown in orange type.

Seventeen pitchers had an IP decline in excess of the aggregate. In this group, IP decline is greater than ERA+ decline.

Only one of the pitchers (Jack Lamabe, displayed in reverse white-on-black) was converted into a starter in the following season. As you can see, that didn't prove to be too good of an idea.

It's a truism at this point in history that workhorse relievers are at risk for injury and ineffectiveness. What we want to see is if the same trend continues when the threshold that defines "workhorse" shifts as bullpen usage shifts--which it will most definitely do when we get in to the latter two groupings.

As we say, stay tuned.
Posted by Near-Genius Nephew at 4:58 PM