AN ODYSSEY THROUGH THE WORLD OF CLOSE GAMES/2

Let's further examine the 25 teams who excelled at winning close games (ones decided by two runs or less). We'll display the data for these teams in two different ways... 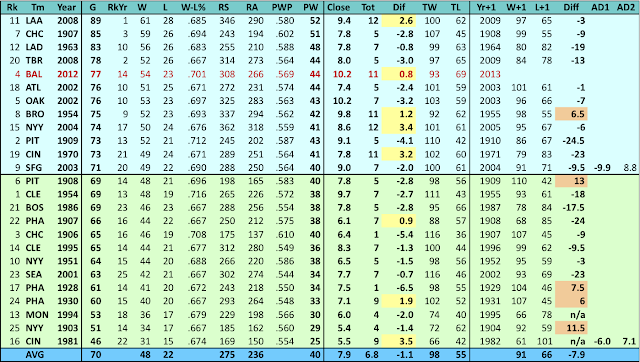 The chart above is sorted in descending order of Pythagorean wins in close games (not actual number of wins, though the 2008 Angels--the all-time leader with 61 close-game wins--wind up on top of this chart as well.

But, no, wait--this chart is actually sorted in descending order of close games played. (The Angels do not hold the record for most close games played--that's held by the 1916 Washington Senators, who had 103 such games, though they only had 97 actual decisions...the teams with the most decisions in close games--101--are three teams from 1968: Mets, Dodgers, Twins; the '71 Astros; and the '83 Padres--none of whom exceeded a .515 WPCT.)

What we are trying to see here are patterns in terms of the number of games and the level of difference in actual games won vs. expected wins (Pythagorean). As you can see at the bottom of the chart, the top 25 teams at winning close games win just under eight more games than they're "supposed to" across these games. They give back about a game in their overall won-loss record in all the rest of their games.

Only eight of the twenty-five teams exceed the gains made in close games in their remaining (non-close) games. One of these was the 2012 Orioles, but the numbers (highlighted in yellow) indicate that the O's gained the least of any of this group. The teams that gained the most: the 1981 Reds (in just two-thirds of a season: '81 was baseball's first strike year); the 2004 Yankees, the 1970 Reds, and those 2008 Angels.

The O's made the greatest gain in close games, however--though Moneyball mavens might be surprised to discover that the 2002 A's were right on their heels. (Yes, that's right: the team that was supposed to prove how small markets could compete did so in large part due to winning an outsized number of close games.)

Of the seven teams who gained ground in their non-close games during the season in which they played .667 ball in close games, only two of these improved in the following year: the '54-'55 Dodgers, and the '30-'31 A's. (This record would be notably worse if we hadn't barred the '81 Reds due to the vastly smaller number of games played in the strike year: the '82 team (at the bottom of the chart) had one of the more striking reversals of fortune in baseball history. 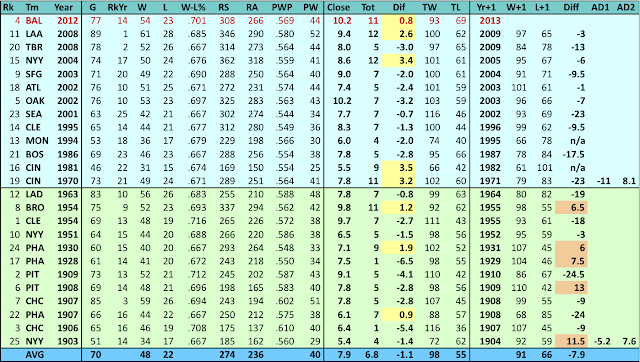 What's extremely interesting here is the fact that there's been a huge run of teams from the last decade (2001- ) who've landed on this list. In the past eleven years, eight teams have moved into the top 25 of close-game excellence. (Our chart, at the moment at least, breaks neatly into periods of divisional and non-divisional play.)

All this doesn't bode well for the Orioles in 2013.

But there is a good bit more to this than merely looking at the Top 25 teams. We need to examine all of the teams in modern baseball history to get a total perspective on how close games factor into the overall structure of winning and losing. And we need to look at all of the teams who've made the post-season since the invention of the World Series to understand how these teams differ from also-rans with respect to close games.

We'll be back with all of that--shortly.
Posted by Near-Genius Nephew at 11:46 PM