We will break from "tradition" and make a few overt political remarks here in the aftermath of the 2012 election. Some said that it was more important that Barack Obama be re-elected this year than it was for him to be elected in the first place. While that isn't quite true, it was nonetheless a significant moment in the troubled recent history of this nation. Reaffirming that race is no impediment to achievement required that the often embattled Obama claim a second term; this broadens the lens on America's ongoing struggle with equality, and shows that at least one aspect of the problem (which has accelerated exponentially since the election of Ronald Reagan in 1980) is at last moving in the right direction. We wish him the best of luck as he continues in what is one of the greatest high-wire acts in American history.

And now let's look at elections from a completely different perspective. What are the results in the World Series when we look at those results in conjunction with the American presidential election cycle? Well, you can see the master list of these championship teams in the chart at left (winning team, league, party of the winning candidate). 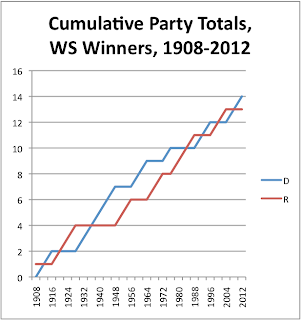 So which party has won more Election Year World Series? It's been a seesaw battle of late, after the Democrats had an early lead. They'd taken over in 1936, and held that lead for nearly fifty years before the Republicans caught up in 1984. As the table above at right shows us, the Dems now have a slight edge, 14-13. As the chart at right shows, the seesaw seems to be with us as a semi-permanent houseguest.

That's not the case for the leagues, however. That same table above displays, American League teams have a clear lead in terms of election-year World Series winners. 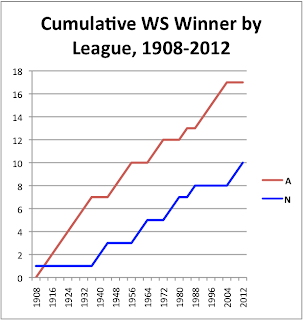 That lead (currently 17-10) took hold in 1916 when the Red Sox won their second consecutive election year World Series, which would be followed by five more AL titles from 1920-36. The only period in which in the NL has had any dominance occurred from 1976-1988, when the NL won three of four election-year championships.

Our final chart (actually, it's a table...) shows the number of election-year World Series wins by team. As you might expect, the Yankees have the most, with seven. Only one other team has managed to do it more than twice.
Posted by Near-Genius Nephew at 11:06 PM