AN ODYSSEY THROUGH THE WORLD OF CLOSE GAMES/1

Here begins a little series on "close games" and how they've worked over the history of baseball. What they mean, and what they don't; whether playing exceptionally well in them over the course of a season is meaningful, or not. 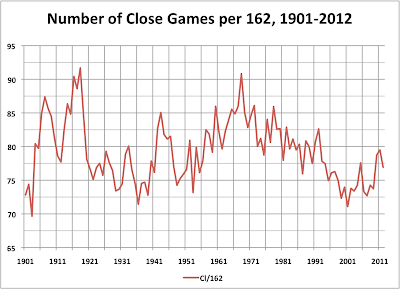 And how they relate to bad teams, mediocre teams, good teams, and great teams.

A good bit of this interest in a subset of games comprising about 45% of the total number played in baseball history was piqued by the incredible run made by the 2012 Baltimore Orioles--a team widely considered to be mediocre, but one that came close to setting an all-time record for winning percentage in close games. It made us wonder about how often teams like the Orioles happen; what, if anything, such occurrences meant in terms of the next season; and whether some aspect of overall behavior with respect to close games has been changing over time as the game has evolved.

We can't guarantee that all of those ideas will get covered in this series, but we'll suck it up as best we can.

The chart at above right will ground us in terms of the frequency of close games--and, indirectly, will tie close game frequency to overall run scoring levels. It stands to reason that lower scoring will lead to a higher percentage of close games (and since we've gotten this far without defining that term, let's do so now: a close game is one that's decided by two runs or less). The peaks on this chart (1908, 1918, 1968) are among the low points in run scoring. The valleys on this chart (1903, 1936, 2001) are among the high points.

There is not an exact relationship here, but it's a strong one.

We'll look at individual extremes (the team level) in a later installment.

Where we want to go first is to look at the teams that excelled in close games. We've told you that the Orioles made a run at the WPCT record in '12; they fell short, but as the table at left demonstrates, they became just the fourth team in modern baseball history (sorry, 19th-century buffs, we're starting in 1901) to have a .700+ WPCT in close games.

The three teams with better records in these games are all pennant-winners who won well in excess of 100 games.

What is interesting about these "excelling" teams is that, on average, they play fewer close games than average. That average of 70 is slightly less than seven fewer close games than baseball's historical average. The O's total of 77 is just about dead-on with that average. The average team here finished well back in the pack in terms of the number of close games (as measured by the RkYr column). The major anomalies here: the 2008 Angels (what us noir fans like to call the "Frankie Machine" Angels, who rode Francisco Rodriguez's record-setting 61 saves to an identical number of close-game wins--a total that is the all-time record).

So what do these teams look like in the year after this exceptional performance in close games? How do their won-loss records compare? We'll look at that in Part Two.
Posted by Near-Genius Nephew at 11:40 PM