THE SPIDER IS *VERY* HAPPY!! 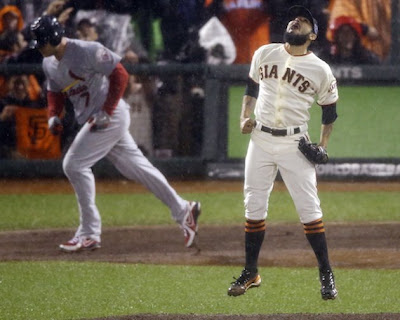 One of our great favorites, Sergio Romo, was on the mound when the San Francisco Giants completed a second back-to-the-wall comeback to defeat the St. Louis Cardinals in Game Seven of the NLCS by a score of 9-0 and advance to the World Series.

Romo levitated into the air in the same manner that our sometimes animated, sometimes forlorn spider pal Webster does. Or is it his hat that does the levitating?

At any rate, the Giants have allayed the fears of those who denigrated the Cardinals for their low win total and the perceived stigma of being "the second Wild Card team." No such thoughts here: the defending World Champs had the greatest amount of adjustment to make, playing without three major contributors to their 2011 title run (Albert Pujols, Chris Carpenter and Lance Berkman) for virtually all of the regular season. In the end, lingering health issues with regard to several key players contributed to their inability to close the deal after taking a 3-games-to-1 lead.

So Webster the spider gets to revel in the third World Series in his still young (and markedly fuzzy) life. He (and the rest of us) will see in the Giants-Tigers matchup (a first for these two teams...) what should be a fascinating collision of starting pitchers and contrasting offenses.
Posted by Near-Genius Nephew at 11:18 PM