REVENGE OF THE BROOM

There is a lot of chatter (not necessarily of the "intelligence" type--though we will drop in the usual oxymoronic caveat for the fabled term "military intelligence"...) about how the 2012 World Series was somehow a dud. 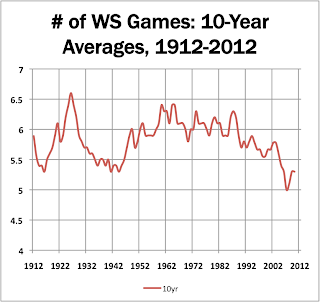 There's some kind of pseudo-aesthetic impulse driving these rushes to judgment, a knee-jerk need that only grows stronger as the speed of things continues to increase, so we can't rely on the anecdotal evidence and have to sift out the underlying reason via other means.

And, naturally, after knocking back a couple of highly caffeinated beverages, we've once again arrived at the answer.

It's meta-decadent consumerism at work again, kiddies. You're simply feeling cheated because you didn't get your money's worth.

To be succinct:  the damn World Series, despite all of the newfangled foreplay with which it's been festooned, is simply becoming too short.

We're getting visited by the broom more frequently than at any time in world history.

A cursory look the data shows that a downturn in the number of World Series games began late in the Reagan years. We haven't really come out of it since, and over the past quarter-century we've seen a complete flip-flop in the percentage of World Series that are wham bam thank you ma'am vs. those that go full-term. 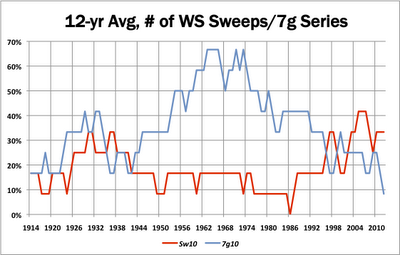 What could be causing this? An extra round of playoffs, perhaps? Our last chart, which tracks running twelve-year averages for four-game and seven-game series, shows a bit of visual symmetry...there is much less distance between long and short prior to 1940 and after 1990. (And yes, you eagle-eye types will note that the descriptions for the data lines should read "Sw12" and "7g12.")

So there was a fifty-year period in which the ratio of long series to short series was particularly high, peaking in the 60s and 70s, when many of our present-day curmudgeons were in what we will charitably term their "formative years." Relative to that time frame, of course, what's happening today is abrupt, shocking, disreputable, and--most importantly--a miserable consumer value.

We can't really think of another reason for this decline outside of the creation of the wild card and the added playoff round: added fatigue might be a factor in creating more "performance separation" (not to mention "performance anxiety"...) amongst the teams who survive to what is now the third (and a half) round. It is a small sample, of course, and subject to all the various vagaries of randomness--but it's a pattern, and our fascination with Oriental carpets (both the floorbound and flying varieties) impels us to bring it to your attention whether you like it or not.

But consumer protectionists can take solace. Surely it's in the best financial interest of those who print $$ from baseball to have its climactic event extend to as many games as possible. In a world where so much seems to be for sale, it's quaintly refreshing to consider that the number of games is going down, when the pressure of the revenue stream would really want it to move toward those peaks we can see in the 1962-74 time frames on the graph above. 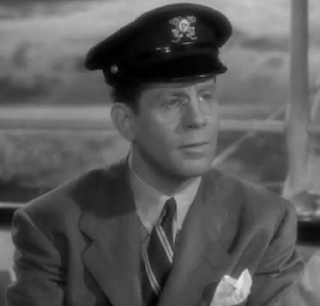 Hey, at least they aren't rigging it to squeeze out the maximum profit margin. (Ah, oops, now we've gone and called attention to it...opening our trap when we should have been shutting our yap. But it's part of our insidious reverse psychological plan to induce a record string of seven-game World Series...which, in case you're wondering, would be five, topping the four consecutive full-term classics that occurred from 1955-58, under that Commie Republican named Eisenhower.)

We leave you with a paraphrase from Preston Sturges' magisterial romp The Palm Beach Story (1942), in which itinerant billionaire John D. Hackensacker (Rudy Vallee) makes a sharp pronouncement vis-a-vis tipping and patriotism. "Tipping is un-American," he says. (Bill James, who's sort of Rudy Vallee on steroids, heartily agrees.) And so, let's all say in unison, are sweeps in the World Series.
Posted by Near-Genius Nephew at 8:46 AM