IF YOU ARE REALLY, TRULY A BASEBALL FAN... 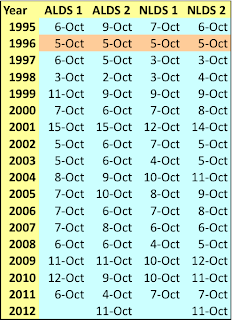 ...then a day like today is the one you live for. Four playoff games, scheduled to permit as much uninterrupted viewing of each contest as possible (not quite 100%, but close...), with each game potentially bringing about the conclusion of the series.

(Of course, we're not saying that we want the Division Series to come to an end today...that would mean that our spider friend Webster would have his hopes of an all-black-and-orange World Series come to an end as well.)

The question remains, though--has there been a year in which all the Division Series came to an end on the same day? If it happened today, would it be a first?

As the chart at right indicates, the answers are yes and no. Yes, it happened back in 1996, in the second year of the current playoff set-up. So no, if it should happen today, it won't be a first.
Posted by Near-Genius Nephew at 11:33 AM