OK, so many of you already know what the "mystery chart" is...but for those who don't, we'll get the misdirection over with by merely pointing to the left and indicating that it has absolutely nothing do with the so-called "mystery dance" that Elvis Costello was so worked up about thirty-five years ago.

You may have recognized some of the strange annotations that the "mystery chart" contained, things like "---" and "1-3" and "-23". That's right: these represent the eight different combinations of "men on base" situations that are possible, running the gamut from bases empty to bases loaded.

These "men on bases" situations have one other important defining component (highly wise folks please insert "of course" at this point). That would be the number of outs that exist at the particular point in time. 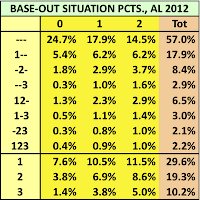 So eight "men on base" combinations times three "out situations" equals a total of twenty-four "base-out states" or "base-out situations." These have been used for nearly thirty years since first being discussed in The Hidden Game of Baseball, primarily to calculate run expectancy tables for the innings in which they occur.

Here is the same chart from our earlier post...except that it's been identified as being the percentage of plate appearances for each base-out situation as they occurred this year in the American League. Our "total" figures in orange provide summary percentages that add up the outs for each "base situation" into a combined percentage. 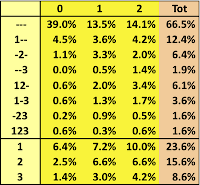 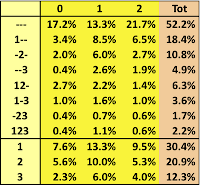 This is an interesting fact in and of itself, but consider that this is just the overall average for the league. These configurations differ for individual players. How much do they vary? Well, here are two "base-out situation percentage" charts for a couple of very notable players in the 2012 AL.

One of these players batted leadoff for his team, while the other batted third in his team's batting order. If you give it a bit of thought, you'll be able to figure out which one is which.

Yes, the player on the left is Mike Trout, and the player on the right is Miguel Cabrera. As you can see, the act of batting leadoff wound up giving Trout more than double the plate appearances that Cabrera had with none on and none out, and about 60% more than the overall league average. One outcome from batting third is that Cabrera's percentage of plate appearances with two out and nobody on increases by 50% over the league average, due to the fixed nature of his plate appearances in the first inning--he is guaranteed to bat third, and more such two out-none on appearances happen at that point in the game. It's about as pronounced an uptick as is the leadoff man's when leading off a ballgame.

Hitting results by base-out situations are tracked at Forman et fil, and that gives us a chance to delve into the nature of RBI performance at a level of detail that just might provide a more objective contextual comparison of this offensive function. We can look at only those PAs that don't result in home runs and intentional walks, and we can compare those RBI percentages for individual hitters. Better yet, we can look at those percentages in comparison to the league average for each "base" situation (not "base-out," however, as that's a level of detail that probably won't tell us much).

We'll stick with the Trout-Cabrera comparison (and why not--everyone else is...) because it highlights how the approach can provide us with a benchmark that doesn't get caught up in the vagaries of the long ball. Cabrera hit 27 of his 44 homers with the bases empty; Trout hit 21 of his 30 that way. Cabrera drove in 66 runs with his homers; Trout drove in 41. That means that Cabrera drove in 73 runs without benefit of a homer, while Trout had 42. 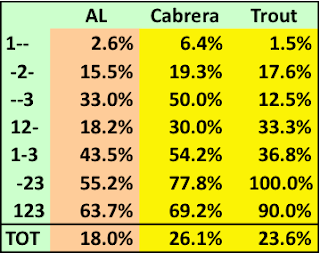 But the two players had vastly differing amounts of opportunities. Cabrera had a total of 277 at-bats where he had a chance to drive in runs with men on bases without the benefit of a home run. Trout had only 180 such at-bats. When we divide the non-HR RBIs by the non-HR at-bats (we leave out the walks), it becomes clear that while Cabrera is a bit better, he's not all that much better at it: his percentage of non-HR RBI/non-HR AB is 26.4%, while Trout's is close behind at 23.6%.

Both of these percentages are significantly better than the overall AL average in 2012 (18%). The chart at right shows the comparisons for each base situation (Cabrera, Trout, and the AL as a whole).

It's interesting to see these percentages broken out this way, particularly for the league. It would be even more interesting to view them in lists for each base situation. This provides a more direct means of comparison for RBI performance that is not biased by opportunities, the relative frequency of the long ball, or the percentage of none on situations.
Posted by Near-Genius Nephew at 11:57 PM