THE ASTROS LEAD OFF WITH A RECORD...

In the midst of an eventful post-season (a flurry of coverage about a less-than-#metoo-friendly front office, a stop-and-start-and-stop-and-start-again path toward a World Series title...) the Houston Astros' in-season achievements in 2019 have, to our knowledge at least, not been fully identified.

As is (more occasionally than usual) the case, we're here to bring you those as-yet unrevealed facts.

Or, more modestly, fact. But even one fact can drive home a point (if not a run). And this fact is another point noted in an escalating series reminding us that baseball in 2019 has continued to rewrite the rules of the game by rewriting the record book. 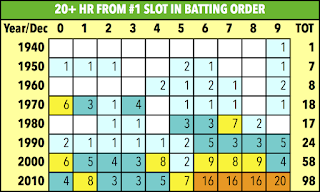 So, yes, we're teasing out the exact nature of this record by posting several of our patented "decade/year" table that capture frequency of events over time. We do this both for your own good and because we just can't help doing it--somewhere in the inchoate middle of those impulses there is (hopefully, at least) enlightenment.

Above right: a D/Y table with all incidences of 20 or more homers hit by the batter occupying the leadoff (#1) slot in his team's batting order. (This is not "leadoff homers", as in leading off an inning with a homer--those would be much more numerous--but the number of homers hit by the man "batting leadoff.") 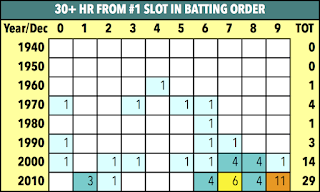 As you can see, the 20+ threshold took awhile to be cracked, despite the appearance of Babe Ruth in 1919-20 and the slow-but-steady homerification of the game. The initial incidence was 1949; as you can see, the rise was slow but steady until the mid-90s, when it accelerated--and over the past four years, has (like so much else in America during this time...) gone out of control.

Above left: the next level up of "leadoff lightning"--that subset of the first table dealing with those #1 slot hitters with 30+ HRs in a season. You may be surprised to discover what team was the first to have a 30+-HR performance from its leadoff hitters...but you are probably not surprised to discover that over the past four seasons this number has risen sharply--reaching double figures (including, as you doubtless suspect, the Astros). 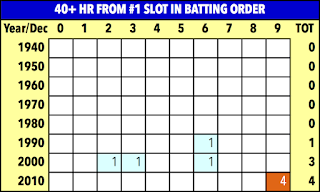 Continuing into more lofty regions, we have one more chart for the leadoff slots that have produced 40+ HRs in a season. The table at right shows you that this is, at least at present, a much more rarified occurrence: only eight teams have managed to accomplish this feat. Perhaps unsurprisingly, four of them did so in 2019: the Braves, the Twins, the Dodgers--and, yes, the Astros.

(By the way, the three times it happened in the 2000s--2001, 2002, 2006--the main culprit was Alfonso Soriano, whose 46 HRs in '06 for the Nationals allows us to make this into a "World Series" post...despite his involvement in these single-season peaks, Soriano is only second in baseball history in terms of career totals for HRs while batting in the #1 slot--in fact, his total of 197 is a distant second. And, no, we're not going to tell you who #1 is...we trust that you can figure this out for yourselves!) 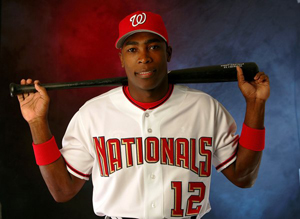 So perhaps you've figured out what the record is by now...is it the fact that George Springer hit 39 HRs batting leadoff for the Astros this year, tying him with Soriano's 2006 mark?

Nope. (Though the above is true.)

The record we're referring to is a team record, not an individual record. In this instance, it's the sum of all HRs hit by all the Astros' #1 hitters in all the gin joints including Jose Altuve, Alex Bregman, Derek Fisher, Kyle Tucker, and Dooley Wilson (hit it again, Sam! ...just making sure you're paying attention).

That total--Springer and his surrogate Astro spaniels--adds up to an even 50. That's a new record, and the first time it's happened. (And no, we're not putting up a table with only one square filled in just to complete the set--you can visualize that on your own...and get your own damned letters of transit while you're at it!)

And, yes, the Astros had more HRs from their #1 slot in 2019 than any of the more traditional "power slots" in the batting order.

Remember, just because we report these things does not mean that we approve of them. When we say that it's the first time a team has had its #1 hitters hit 50 HRs in a year, we also mean to say that we hope it never happens again. Baseball's whack is out of whack, regardless of the virtues of a front-loaded batting order. We're shocked, not awed--and you should be, too.
Posted by Near-Genius Nephew at 9:21 AM