History is written by the winners, so it is important for us to know what we've lost (and what else is up for grabs). The saga of baseball's slow but accelerating rush into morbid two-dimensionality needs as many sub-chapters we can find if the counter-narrative is going to have chance to live to fight another day, so here we are again with a couple of quick examples of what we are losing.

1. We are losing a game where it's OK to be a non-HR hitter. 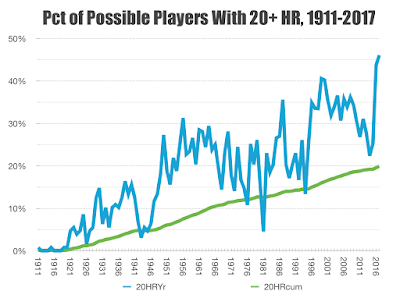 We can graph this by looking at the percentage of players who are hitting 20+ HRs in a season. What's interesting about the graph (at right) is that it shows baseball's inherent volatility from year to year on this issue. Well before our present malaise, the home run incursion became one of the ongoing battlegrounds. By the 1950s, as the graph shows, this issue had reached its first major crisis point, the 30% threshold. This persisted into the 60s despite the strike zone adjustment; but note how much more volatile the graph becomes at the end of the 60s. The first homer "spike" in 1987 got us to the 35% level, then there was subsidence for awhile (ignore the dip in the 90s--it's due to the strike year in 1994: no matter how much a banjo hitter might want to, he can't hit 20 HRs if they take 50 games away from you).

The percentage hits 40% at the turn of the century, after which there's a steady state in the mid 30s for awhile, before subsidence kicks in the post-offensive explosion era, which begins in 2009. We actually drop down under 24% in 2014, but run scoring is too low (just over four runs per game), so "something" changes in the second half of 2015. And in 2016-17, of course, that "perfect storm" occurred, setting two new records and breaking the 45% barrier to boot.

As we've mentioned earlier, this is a recipe for morbid two-dimensionality (which is baseball's equivalent state for morbid obesity) and its danger is that it will actually take offensive levels back down to the 1960s. This is not a situation achieved in ignorance, as was the "second deadball era" which stemmed from a knee-jerk strike zone change; this is a situation based on fifteen-plus years of relentless application of neo-sabe ideology masquerading as math/model-derived "wisdom." When you see a spike of this nature, you're seeing the application of several simultaneous factors that are calculated to increase a particular style of offense at the expense of others.

The chart demonstrates that the style has been with us for close to seventy years now (since the 1950s) but it was allowed to metastatize during the offensive explosion era. The steroid backlash did little to change its inherent approach, however, and the factors we discussed in a recent post coalesced within and around the institutionalized neo-sabe "TTO"-dominated ideology.

The chart is useful in showing that there are yearly adjustments that have often occurred with respect to HRs (more accurately, in HR prevention) and it appears that 2018 is going to be an adjustment year. Nine days into June, HR/G are at 1.2 for the month--down from the record 1.35 set in June 2017. More revealingly, perhaps, is the fact that overall batting average is still down about 20 points (from .263 last June to .242 thus far this June), indicating that the pitcher adjustments are aimed at the source of last year's HR-fueled rise in offense (4.91 R/G last June, 4.23 thus far this June).

You can see some of that in the updated comparison numbers between 2017 and 2018 (above right), though they don't spell it out in the numbers quoted above, but rather as the rate of change this year relative to last. Adjustments...or the neo-sabe sop "regression to the mean"? Time will tell, and we'll see who gets to write the real history of what baseball has done to itself.

2. The near-extinction of hitters whose offensive value is not HR-based, but comes from BBs and "balls in play."

Even in an age where 30% of all possible hitters were hitting 20+ HRs, we still had a silver lining: low-HR hitters whose other skills (BA, walks, doubles, and--yes--triples) gave them plenty of value and a place at the top of the batting order.

And given what you've just read above, you shouldn't be too surprised to know that this age is definitely not that age. The offensive explosion allowed for those types of players, because, as the historians like to say, "a rising tide floats all boats."

But the historical data shows that there are two eras where low-power, high-walk players (defined as 12.5% of more of all plate appearances, and less than 10 HRs with at least 300 PAs) have simply disappeared: the 60s, and the past two decades. 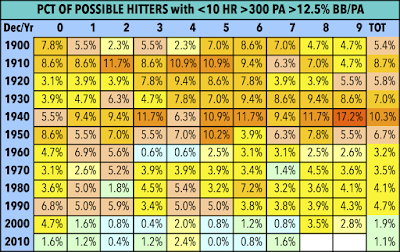 The year-by-year and decade-by-decade averages (at left) of the "percentage of possible players" who fit the above profile show how this "offensive safety net" has ebbed and flowed--and how it's been stripped away since the beginning of the 21st century.

You can see what the strike zone change in 1963 did to this type of player: it just killed them. Of course, there were some adjustments made by hitters, but the overall result was to eliminate 50% of such players from the game over the decade of the 60s.

That stabilized and began an upward progression over the next three decades, continuing into the offensive explosion. In 2000 the average was a relatively robust 4.7%. And then...POW! A new paradigm emerged, in tandem with a semi-official re-institution of the high strike. That marginalized this type of player; and, aside from a few random fibrillations toward the end of the last decade, we now have essentially flatlined.

These are also the years in which the "neo-sabes" have penetrated the insider world of baseball.


Posted by Near-Genius Nephew at 8:16 AM