HANKE AND THE HALL OF FAME 1: IN TRAVESTY WE TRUST...

Pretend for just a moment that it's twenty years ago. Bill Clinton is President; Donald Trump is a real estate buffoon. The vampires of the Republican Party have not yet found the elixir that permits their "undead" to operate darkly in the light of day. And there is no Forman et fils (Baseball Reference, for those who've stumbled in here for the first time) or Phangrafs--worse yet, no David Pinto.

That means you're reading your baseball stats (if you were wonky enough to do so) in a thick volume entitled Total Baseball. And if your wonkiness extended into an alternative universe (little would we know that we'd really be needing one twenty years later...) you'd have a copy of that doorstop with a series of entries in TB's statistical reference section that told a different version of baseball history from 1971 on.

That would be the book with several odd-sounding franchises--the most notable (if not the most notorious) being the San Antonio Trotters. In 1998, the Trotters had been dissolved, disbanded, and dumped in the same place that, back here in the present day, one can only hope will be the not-too-distant resting place of Le Anti-Grand Orange; but what they did to baseball in the previous quarter-century was both beyond belief and beyond the pale.

Perhaps the chief architect of this meta-tectonic travesty was one Brock Hanke, who took a deck of cards one late-winter evening in 1971 and gave Robert Coover a serious run for his money. ("Dice are nice," Hanke proclaimed, "but I can knock the earth off its axis with this house of cards.") The rabbit hole that Hanke opened up at the feet of yours truly and a rotating cadre of unmentionables would soon invoke a dynasty so gloriously odious, so superciliously subversive, so patently absurd that it could only fold back on the funhouse image of America that would all too soon turn into a proto-fascist quagmire. 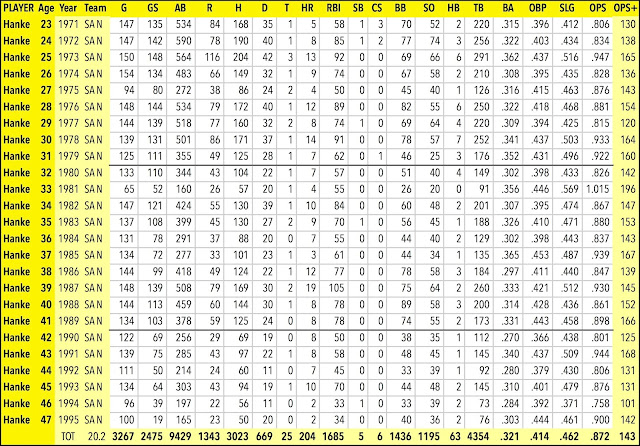 Hanke had only two saving graces in the midst of this mishegoss: first, there were no emails with which to taint the tattered remnant of his mortal being; second, by virtue of being the first playing owner of a baseball team since 1890 he was able to secure a semi-permanent roster slot for himself on the Trotters, where he slowly and painstakingly compiled a set of statistics like no other player before or since.

And so, if you blinked backwards, or ingested some mushrooms with extra mischievous "magic," you'd suddenly see a set of statistics in Total Baseball like those displayed in the table (above right). With league-relative stats at their zenith of usage (prior to the deadening era of WAR...), we see that Hanke, while clearly a curious specimen, is also undeniably a productive curiosity, what with his 143 OPS+.

The details of these twenty-five years are both beyond our ken and beneath contempt--there's that flashing image of the execrable Orange Kewpie Doll again--so we'll spare you from a narrative that likely would cause you to follow in the footsteps of Ray Milland's character in The Man with The X-Ray Eyes. What matters here is to take all this hoo-hah at face value and evaluate it with a relatively straight face, as if it were somehow "real."

The question on the floor is as follows: is this the statistical log of a (gulp!) Hall of Famer? We'll leave you lying on the floor with that slow drip of nitrous oxide seeping into your lungs, bound and gagged by these alien, improbable numbers. Don't even try to numb your senses with that years' supply of Novocaine chewing gum you see above you on the shelf, so close yet so firmly out of reach...just read the numbers until your eyes begin to cross; and, before you laugh yourself into a blissful unconsciousness, "double down" on your opinion of their overall quality. (Forget about the Hanke you may have met in real life: forgive--or overlook--his not-so-occasional weakness for buxom Goth girls. Focus on the man who defied the odds and, thanks to an unkempt seam in time and space, compiled these numbers like so much wreckage salvaged from the sea. Then decide whether these numbers qualify him for a plaque in Cooperstown, where his grin will be the spitting image of the cat who swallowed the canary.)

This trickster's Cheshire tale will continue anon...
Posted by Near-Genius Nephew at 8:55 PM