HANKE AND THE HALL OF FAME 3: A SPY IN THE HOUSE OF WAR

Third time's the charm, even if some (if not most) of what's written here leans heavily toward the charmless. We come to enshrine (or cast into limbo) the "as if real" career of one Brock Hanke, the architect and utility player of the San Antonio Trotters--a living, breathing anomaly in his own write.

And after having looked at the overall data (#1) and a semi-traditional evaluation (#2), we now subject him to the third degree--a disqusition according to WAR (Wins Above Replacement).

Most everyone reading here knows of WAR; a large subset of you will register misgivings for a method that steps away from direct league-relative measurement, that oddly mixes defensive adjustments into purely offensive statistical measures; a system that purports to work via a simple additive function set but breaks from this approach in creating its final values.

It is truly a case of misbegotten modeling--but in a world where the mysticism of money continues to provide a suppressive weltanschauung for the theories that hide how things really work, it has become a pillar of salt disguised as a pillar of orthodoxy. It is the only statistical measure that was subject to a "summit meeting" to hammer out a negotiated compromise for "replacement value," a concept already steeped in money mysticism to a point of no return.

WAR's status is currently at a point analogous to what we see in The Wizard of Oz when Dorothy and her pals first visit the Emerald City; the bell and whistles they (and we) encounter are loud and intimidating, and make unreasonable demands on those who simply wish to remedy a few simple deficiencies in their lives/worldviews/thinking processes. We're not quite at the point where we can reveal the mathematical humbug (in the way that the Great Oz was exposed), but as with what we face in a distinctly un-Oz-like present-day America, we'd better brace ourselves for an avalanche of bluster in the wee hours before the truth will suddenly rise (in a long-delayed dawn). 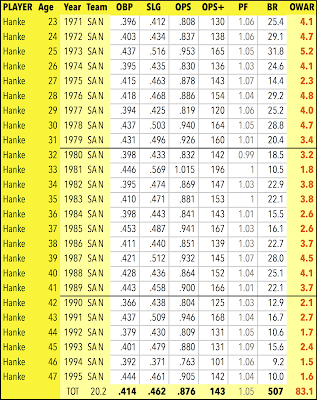 All of which is to say that we had to create a version of WAR for Brock Hanke's career stats based on a bathtub-gin kluge, using the relationship existing between WAR values as calculated for players with similar offensive profiles with the Batting Runs values generated back in the "classical sabermetric age" by Pete Palmer and Gary Gillette. Those ratios provided us with the best estimate of what Hanke's WAR values would look like [table at right].

Note that these are the offensive values only. We did not keep track of defensive data in the games we played, occurring as they did in the pre-personal computer age. As he would himself cheerfully admit, Hanke was not much of a defender: the Trotters tried him out at third base, which did not make for a pretty picture (hey, the man is left-handed!). After a switch to catcher in mid-'72, he settled in at first base the following year, and would play 85% of his games there from that point onward.

At this point we should mention the "trad" stats you'd have seen in the previous two posts: .321 lifetime BA, 3023 H, 669 2B, 204 HR, 1685 RBI. On a mighty dynastic team with flashier players, Hanke was a hidden star, a solid OBP and RBI man. And the OWAR values, when added up, seem to confirm the notion that his career is of Hall of Fame quality.

But it's the "second order" usage of WAR--as a measure of "peak"--that will turn into the "valley of death" for Hanke at the hands of analysts. Systems devised by hack neo-sabes like Jay Jaffe, which simplistically try to split the difference between two inchoate and inadequate representations of offensive value, would penalize Hanke for not having a "peak" commensurate with his "career" value. (Hanke's "seven-year peak" in WAR is only 32--which, when utilized as part of the simple-minded averaging that is the basis of Jaffe's "system," leaves him with a "compromise value" of 58 WAR--which would leave him on the outside looking in as regards Cooperstown.)

Certainly there are better ways to use WAR than Jaffe and others have done: heck, they might even try converting it into a rate stat. When we do that, Hanke's value in the first baseman class gets an interesting boost. The average Hall of Fame first baseman puts up just under 5 WAR per year (using 660 plate appearances as the basis). That includes a few players (Jim Bottomley, George "High Pockets" Kelly) who are deficient both in terms of WAR/yr rate and career length.

Hanke's career length (25 seasons, 3200+ games, nearly 11,000 plate appearances despite an increasing amount of part-time play over his final decade) is not an issue. And his 4.99 WAR/660 plate appearances is right in the pocket for Hall of Fame first basemen.

But Jaffe's averaging method arbitrarily lops off 35% of Hanke's offensive value as measured in the rate stat. It's a bit less Draconian in the counting stat version, chopping off "only" 30% of the original year-by-year WAR total.

WAR itself would invariably adjust Hanke downward from his batting runs-derived value in the context of its opaque "methodology." And a generation of armchair analysts would prattle on about "complete players" in their hypertrophied mental-gymnastic assemblage of the Hall of Fame.

They would focus on what he could not do (hit HRs, run the bases, field like an All-Star) and find ways to minimize what he could do (hit, hit doubles, drive in runs at a rate elevated from the statistical norm, exceed his overall hitting rate stats as a pinch-hitter) in order to rally around the stultifying orthodoxy they wish to claim as "outside the box" thinking.

EPILOG: Of course, the question is whether a player with Hanke's offensive profile and specific career path could actually exist. Baseball and WAR, WAR and baseball now go hand-in-hand to curtail this possibility, boiling the game down increasingly--inexorably--to isolated power. The approach they are taking is slowly--inexorably--leading us toward a version of the game where there is zero chance that such a player could ever exist.

And that's a shame, because as a player, Hanke is incredibly good for the game. He makes possible a type of human connection that the average fan needs in order to have sufficient choice in role models. You don't have to fit into an "elite" vision to still be excellent: there are many ways to be valuable, productive, inspirational. And you can wind up in the Hall of Fame because you were famous for not being the best, but something uniquely valuable.

That's an evaluation that WAR can never make--and that's why Brock Hanke (the "mythical" one and the "real" one--who's to know which is which?) is the type of figure that history (and this moment in history...) really needs to discover and embrace.
Posted by Near-Genius Nephew at 6:40 PM