Let's sum up what we know about World Series geography in a succession of visual displays.

First, the overview of the percentages for the nine categories with at least one incidence (we're still looking for the first "South-South" World Series (in the table at right).

Since 1961, "East-Midwest" (the geographic matchup that we have for 2015) has been the highest (22%) but the incidences are much more spread around the categories now.

That's especially the case from 1998 to the present.

What about summing things up by basic region? (That is, East-Midwest-West-South, as we did up to a point in the previous post.) We really only need to do this from 1961 to the present, since the West and South simply didn't exist as regions until then. 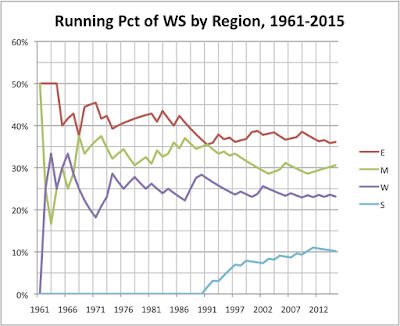 This will look best in a "running total," and in a chart rather than a table, so here goes.

We can see that while the West got into the act early, the South languished and didn't get into the World Series action until 1991.

(And we should also remember that the Southern region consist of just five teams out of MLB's total of thirty, so it's likely to be trailing the pack. The Midwest region actually has twice as many teams in it than the South (with ten), so by rights they should have the highest percentage of team in the WS over this time span, but they don't: the East does.

Finally, here's a table that sums up what's been going on by region with respect to the World Series since 1991. We wind up at the bottom with the total number of WS appearances for each region as the numbers add up.

We also get the color coding for the times when there are years where the World Series occurs entirely with a single region (EE, MM, WW...remember, no "SS WS" has happened yet).

We can see that it's the Eastern teams who've managed to get into the most "all-region WS," with three over the past twenty-five years,

And we can see just how the West languished, reaching the WS just once in the first nine years of the time period, and not really showing something like a normal distribution until as late as 2010.

When you look at it this way, the South (with half as many teams in its region as the Midwest) has done a good job of holding its own.

And, in fact, the Midwest has had to stage a rally over the past five years to slip ahead, with a team in the WS in each season.

At some point we'll put all this together with which region actually won all of these World Series, but we'll save that until we know who wins this one. Stay tuned...
Posted by Near-Genius Nephew at 12:55 AM