WORLD SERIES WINNERS AND THEIR WPCT IN SEPTEMBER

We were taking a snooze with our phone--a phrase that might describe most of the Western world these days--opening one eye, then the other, keeping tabs on the final day (no more plural "daze" for the 2015 season, that's for sure...) and we found ourselves corn-fed over to Sports on Earth, where stringer extraordinaire Paul Casella provided a shocking little data point.

What was that shock? No teams in the past twenty years (1995-2014) who played .700+ ball in September (to keep our "cred" with those who genuflect in Mecca-esque formation to Forman et fils, let's specify that as being "Sept-Oct" in the monthly splits...) have gone on to win the World Series. 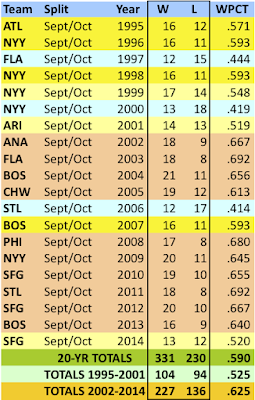 Well, holy hangnail...that actually is a shocker, and Casella doesn't quite deserve some of the snark he's getting in the comments section over there (we think most of those comments are some kind of whacked linguistic algorithm created to simulate human beings, part of the meta-sophistry of post-modern life...at least we hope real people aren't that ignorant and mean-spirited).

But we do think Casella should have provided one additional piece of context, just so he wouldn't be vulnerable to the "freak show stat" accusation.

What's that? Why, of course, it's the September-(October!) WPCT of the teams who won the World Series.

We've taken the liberty of accessing Forman et fils for that data, and it's what you see at right. As you can see, 1995-2001 was a "cold spell" for World Champs in the month prior to the post-season, with no teams playing over .600 and an average WPCT of just .525.

We'll update this with the final Sept-Oct WPCTs of the 2015 playoff teams. However, a preview: the only post-season team with a .700+ WPCT during the last month (and purportedly doomed to fall short of winning the World Series...) is--you guessed it--the Chicago Cubs.

Posted by Near-Genius Nephew at 4:53 PM