WHAT HAVE WORLD SERIES WINNING TEAMS DONE BEST? (part one)

There are literally hundreds of ways to try to answer the question in the title above...the first thing that needs to be done in order to narrow the focus is to decide what our point of comparison is. Are we comparing World Series champs to all other teams? Are we comparing them to all other playoff teams?

Or are we going to look at them only in terms of their opponents in the World Series?

Prior to 1969, of course, that was the only point of comparison we had. So to keep any potential data set operating on at least a semi-consistent basis, what we propose to look at here (in a series of posts to appear irregularly during the off-season) is what separates World Series winners and losers. So we are performing only a binary comparison here.

Even with that, we still have many ways to skin the cat. What type of performance are we talking about? Is it what happens in the World Series itself? No, that would be too small a sample size. We'd be better off looking at the in-season data for the two teams and seeing if any strong patterns emerge from it.

So--in-season data. What type of data? Pitching? Do we want to look at bullpen performance? Particular layers of that performance? What about hitting? What would be significant enough as a rough guide to capture differences? And will any of them prove to be more than a random pattern? 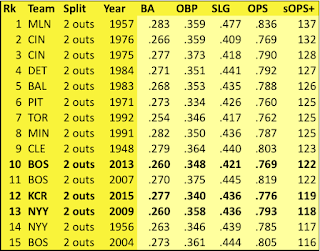 Well, no way to know without just diving in somewhere and hoping that it's not the shallow end of the pool. Reaching in semi-blindly, we're choosing to begin by looking at the teams' hitting with two outs. That's a large enough data sample in each season to be meaningful: we're not down to something that's only a tenth of the total plate appearances.

It turns out that this particular split data goes back to 1957, with a few other seasons prior to that available as Retrosheet fills in more play-by-play data further in the past. Interestingly enough, when we use the sOPS+ value from Forman et fils as a way of gauging how much better than average, we find out two interesting facts. First, World Series winners are, on average, 9% better than their overall league average in hitting with two outs. Second, the 1957 Milwaukee Braves, one of the very first teams for whom we have this data, have the highest sOPS+ value of any World Series winner, at 137.

The 2015 Royals, the most recent World Series winner, rank twelfth on this list, with a 119 sOPS+. 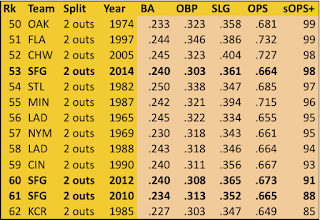 The other interesting thing here is that we are seeing a lot of recent World Series winners on either extreme of this list. Particularly unusual is the fact that the San Francisco Giants, in all three incarnations of their recent even-year dominance of the World Series, were very poor performers when hitting with two outs.

So now what we want to know is: how does this stack up against the teams they beat in the World Series? All of the above wouldn't mean jack if the losing team in the Series had a higher sOPS+ in plate appearances with two outs. And it turns out that it is lower--not a lot lower (104), but lower.

But there is another nuance we should explore here--namely, when two teams face off in the World Series, does the fact that one of these teams performs better with two outs of any predictive value with respect to who is the eventual World Champion? Or is this simply another random variable?

The answer: there is some possibility that it is, in fact, an indicator--particularly in recent times. Measuring the data from the first year where we have both winners and losers available (1957), we see that the eventual World Series winner has had a higher sOPS+ when hitting with two out in 32 out of 54 Fall Classics, or 59% of the time. 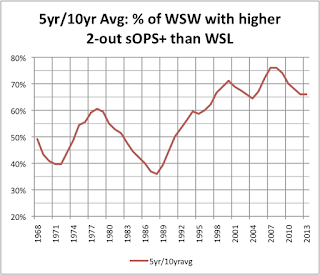 But this was a 50/50 proposition from 1960 through 1982; since then, the odds are closer to 2 to 1 in favor of the World Series winner having a better 2-out hitting performance during the regular season that the World Series loser.

Interestingly, as the teams that make the World Series become more subject to the random forces that have taken hold due to the expanded post-season, the more robust this trend has seemed to become. In the past 20 World Series dating back to 1996, the team with better 2-out hitting has won 14 times (70%). And as the chart at right shows, the five-year smoothed ten-year average for this data shows an even higher correlation than that over the past ten years.

Small sample size? Of course. And none of this takes into account all of the intermediate post-season matchups that occur along the way to the Fall Classic. But it is interesting to note that this trend has strengthened even as teams in the World Series are declining in average WPCT due to the randomizing effects of the expanded post-season.

This is one we will have to keep an eye on moving forward...