What is a "back end" batting performance? It's essentially the second half of the year--defined, for our purposes, as July 1st to the end of the regular season. As always, David Pinto's Day-By-Day Database makes this data easy to come by.

We're just going to look at the most notable "back ends" from 1957-1966--the first ten years of what's available (if you're out there lurking, David, we're still hoping that you'll find time to push backward in time and incorporate the game log data that Retrosheet has made available back to 1918).

We've listed the player(s) who won the Most Valuable Player Award in red ink. We've also put leaders in various offensive categories in bold type. As you'll see, Roger Maris hit the most homers from July 1st on (at least in the 1957-66 time frame) with his total of 34 (en route to his controversial 61 in 1961). 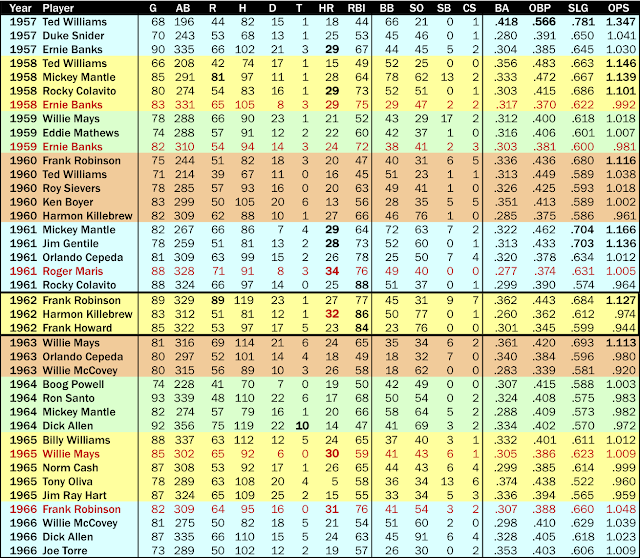 But as you can see, for the second half of '61, Maris was nowhere near the best hitter in baseball, or even in the American League.

Our fiftieth anniversary year (1962) contains a surprise: the Dodgers' Frank Howard led the NL with 84 RBI in 85 games over the last half of the year. Impressive as that was, it still didn't hold a candle to the second half turned in by Frank Robinson, who made the strongest possible bid to win back-to-back MVP awards but came up short in the topsy-turvy voting that year.

It's also hard to fathom how the San Francisco Giants wound up falling short in the 1963 NL pennant race given their incredible troika of hitters they had working for them that year. Someone named Koufax might have had something to do with it, of course--and the fact that the Giants' pitching faded away in the second half (2.94 ERA the first half, 3.80 in the second--and 3.80 was not good in 1963!).

But clearly the most astonishing "back end" performance on this list is the one turned in by the great Ted Williams in 1957. Teddy B. had to sit out games due to age and injury, but when he was in there he was otherworldly (as a .418 BA and a 1.347 OPS would tend to indicate).

There are no "unknown soldiers" on this list. With a half-season's worth of data, that's rarely the case. So enjoy the flying-high boys of summer (where have we heard that phrase before??). We'll return with  another installment of this list soon.
Posted by Near-Genius Nephew at 10:12 PM