HOW TO CHARACTERIZE QUALITY OF PLAY PART 2

If you've looked at our first post on this subject (and the accompanying graph), you'll know that there is more work to be done in creating a good representation of what might best be termed the difference between a team's real-world won-loss record and their true quality of play.

For purposes of this demonstration, we are fortunate to have the highly unusual performance of the 2012 Baltimore Orioles, whose path to a possible post-season berth will translate into a series of even more interesting graphics than what was shown last time.

The first way to get past the simple run differential chart that was posted previously is to measure the difference between a team's actual winning percentage and its Pythagorean projection (PWP) in a series of 30-game snapshots. We've telescoped the data here by presenting those snapshots in five-game increments (1-30, 6-35, 11-40...on up to 106-130--a bit behind the current data, but more than sufficient for demo purposes). 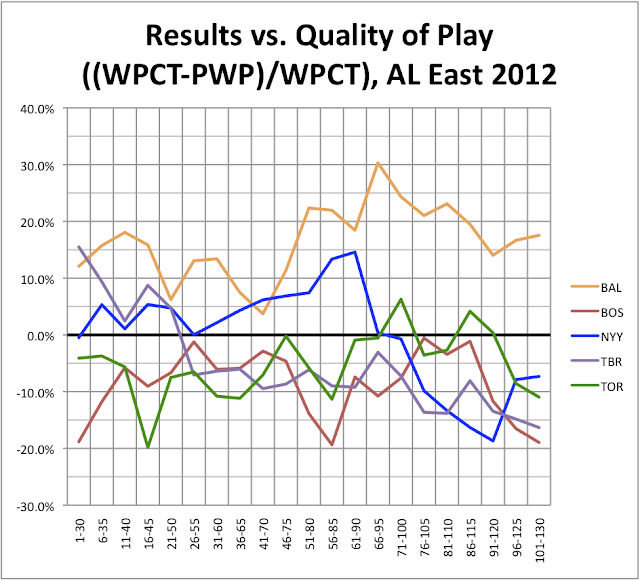 For this chart, using the AL East only, we've calculated the difference as shown in the chart title--as the percentage between actual WPCT and PWP. (Expressing this total in projected games won might seem preferable, but those differences seem larger than they actually are when expressed in 30-game snapshots; percentages provide a more evocative picture of how much a team is deviating from what its RS/RA ratio suggests its WPCT should be.)

The chart shows the fluctuations in this WPCT/PWP relationship over the course of the season, giving us the degrees of over-performance/under-performance for each AL East team. It's not possible to show it on a simple line chart, but the O's greatest period of over-performance in 2012 coincided with the points in time when the team was struggling the most (had its lowest 30-game WPCTs). As we noted in our discussion of the O's earlier (you know, the one with the damn Cheerios and the Tango Love Pie™), the team's ability to avert a greater collapse during their rough patches in June and July was instrumental in keeping them within range to make a run at contention.

The chart also shows that the Red Sox have been under-performing in this respect for the entire season, but we suspect that the loud moaning from Massachusetts has made this painfully obvious to everyone.

The irony--perhaps even the paradox of this chart--is that the Tampa Bay Rays are actually playing so well right now (their pitching is having a simply phenomenal run) that there is no way for their actual winning percentage to catch up to their PWP, at least in 30-game snapshots. It's one reason why PWP is usually a suspect tool at this sample size level, and why you cannot take this chart as any kind of predictive instrument.

What it does reveal is that it's possible to consistently play over one's head for most or all of a season, thus reinforcing the ideas first propounded by Bill James in the 1989 Baseball Abstract (the one the year after Bill "broke the wand," edited by Brock J. Hanke and Rob Wood, featuring yours truly as designated court jester...), which is simply that "luck in baseball does not even out over the course of a 162-game season." The chart above is a fine demonstration of this generally unheeded principle.

We'll be back with more on this tomorrow.
Posted by Near-Genius Nephew at 6:44 AM