Back in 2008, we wrote an essay for The Hardball Times about a new (read: outlandish) approach for the All-Star Game...that cotton-pickin' notion was to have three squads per league (one for each division) and create a round-robin tournament featuring three-inning matchups. (You can re-read the original article to get a sense of how it works. Trust us, it's outlandish--but it's a helluva lot more fun than the current set-up.)

One of other advantages of the divisional approach is that it permits a deeper cut into the expanded talent pool of relief pitchers--particularly the middle relievers, who always get short shrift come All-Star time.

Last but not least, this approach actually makes use of the division construct--one of baseball's necessary evils (a phrase that does not extend to the tricky troll who is still occupying the Commissioner's Office)--and gives it the type of twist that anyone wearing knickers will be sure to appreciate (even while they're complaining). 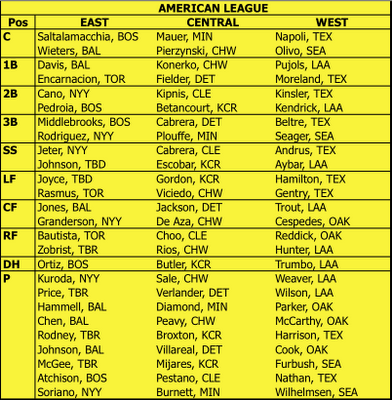 So take a gander at the 2012 Divisional All-Stars, voted on by no one, imposed by fiat at the behest of the mercurial, semi-trustworthy BBB brain trust. You will notice a series of familiar and not-so-familiar names, and you will also notice the absence of many who were voted in by the fans.

Take a moment or two to look at the performance numbers for many of those mysterious names listed under the pitchers...while most of the starting pitchers (found at the top of each divisional list) are well-known, there are quite probably a dozen or so of the names found in the lower depths of the list who are toiling in total anonymity. 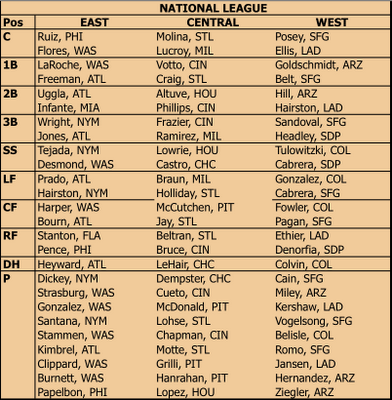 One of the great virtues of the divisional approach--and we can't repeat this often enough--is that these mostly faceless performers actually receive some recognition for their accomplishments.

We added a "DH" slot for the NL to keep roster sizes consistent.

The extra slots also allow us to pick out a few players who've turned in noteworthy performances in part-time roles--for example, Craig Gentry of the Texas Rangers.

And our old pal Jerry Hairston of the Dodgers.

And a couple of fellas who know how to take a walk--A. J. Ellis of those same (swooning of late) Dodgers, and Brandon Belt of the Giants (finally getting some playing time).

And, of course, it's our chance to pay an hommage to one of our favorite bearded wonders--the other bearded wonder of the Giants' bullpen, who doesn't get all the face time with the foo-foo press, who is shut out of the insidious, insipid Taco Bell commercials and is still stuck at MLB's minimum wage, who is--really, truly, actually--a much bigger loon than the one who shares his name with the man who's once again a Beach Boy...

So who is it that's getting this altogether all-too-long build-up? Can we just stop spewing and just spit out his name, for Crissakes? Well, hey, all you gotta do is ask nicely...

The last year-and-a-half for Sergio (who's no bruiser--he stands all of 5'10) has been simply astonishing (1.27 ERA, with ancillary stats that will make your eyes go as buggy as his).

If nothing else, an All-Star Game nod might at least get Sergio a well-deserved raise.
Posted by Near-Genius Nephew at 9:58 AM