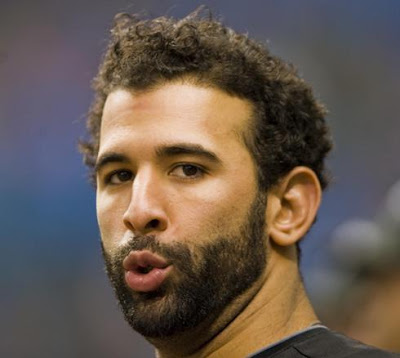 Some comments on the World Series a bit later, we have some unfinished business before we slip into "Awards Season" in November.

We'd discussed the Ptolemaic MVP Method earlier in the month and laid out the method in detail back in Part 2, which you can access here. We're going to move through the American League data rather swiftly here, but will try to refer to some of the points raised earlier.

Briefly, each two month "epicycle" (see Part 2!!) awards points to players who excel in OBP, SLG, OPS, HR, and RBI. (The latter two are concessions--you can call them "sops" if you wish--to the "mainstream" world. While the sabe folks have made strides, it's also true that they tend to make it harder to drag the rest of the unconverted along.)

These get added up over the course of the season from five interlocking two-month-long snapshots of hitter data (we'll address the issue of pitchers and the MVP below).

What's interesting to note here is that two-month snapshots seem to prove that a third of a season is a sufficient "leveler" of achievement that you don't have a slew of fluky achievements in any of the stats being measured. We don't have six guys with 1.200+ OPS in every two-month snapshot (at least we didn't in 2010--it might be different back in 1996--we'll go back and check that out one of these days.)

Let's get to the data. (Before we do that, however, let's note that the data here is courtesy of the extremely useful Day-By-Day Database that's available to all for free at David Pinto's Baseball Musings site. Here is April-May:

Brings us back to that blissful moment in time when Jose Bautista gave all of us another reason to realize why Keith Law was such a problematic choice to be the "pioneer" inside a major league front office and a dubious selection as a BBWAA member. Semi-cheap shot aside, there's still time for the overall deal that the Blue Jays (ironically enough, Law's old employer) made with Jose to turn out a net negative, but after Jose's 2011 season, odds are about 1 in 100 that this can happen.

What a two-month period it was. And it shows us how we award extra points. They are awarded when a player exceeds a .500 OBP and a .700 SLG over a two-month period. Bautista is the only hitter in 2011 to be awarded these bonus points. [EDIT: there's an omission in the chart...Mark Teixeira should be awarded a point for his 15HRs. We'll fix that at the end: it will have little or no impact on the final results.] 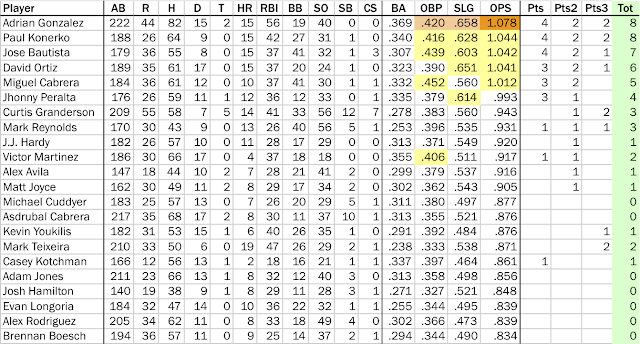 By the end of June, the Red Sox were firing on all cylinders (before Kevin Youkilis began to give ground to nagging injuries). And we haven't yet seen the rise of Dustin Pedroia and Jacoby Ellsbury, either--that's coming. [EDIT: Mark Teixeira again shows us another area where it's possible to add bonus points, that area being in isolated power. His .300 ISO despite a very indifferent batting average reflects his league-leading HR total for May-June. It's not included here because we applied only when the player didn't get points for HRs and RBIs in the "epicycle."]

Bautista is coming down to merely superstar--as opposed to superhuman--levels.

Look quickly, for this is the only appearance of Alex Rodriguez on these charts. 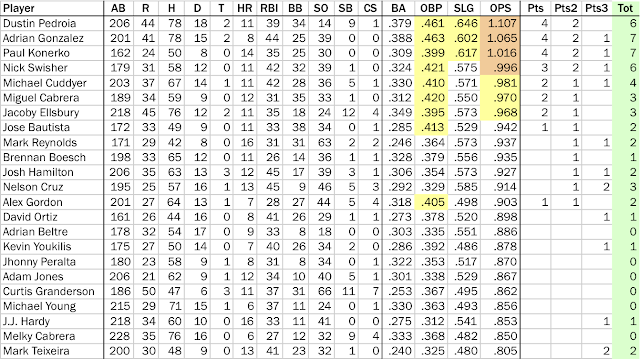 As noted above, witness the rise of Pedroia and Ellsbury. In this two-month snapshot, the Red Sox have five hitters on this list--the most that any team was able to place in any "epicycle." (The Rangers have four in June-July--Josh Hamilton, Nelson Cruz, Adrian Beltre, and Michael Young. The Mike Napoli Era is about to begin...)

Another interesting thing to notice, though it's a bit off-topic here, is the difference in Adrian Gonzalez' walk totals this year, when he was surrounded by a very strong supporting crew in Boston, from what those numbers looked like over the past few years in San Diego.

Also notice how close the OPS values are for Jose Bautista and Mark Reynolds here. One an odds-on MVP candidate, and the other the "all or nothing" king of the breeze. In any "epicycle" there will be a few strange bedfellows...

Pedroia just misses bonus points for HR and RBI, which may cause some teeth-gnashing somewhere. We could talked into giving a bonus point for a 1.100+ OPS over an "epicycle," given that it's something that happened only four times during the season in the AL. But we didn't do it this time.

A very good hitting epicycle, we cut it off at a higher level than in the previous snapshots. Bautista, after a slow (for him, at least) June-July, got back in the groove in August to challenge for the top spot in OPS. However, top dog here is clearly Mike Napoli (the man Mike Scioscia disinvited to dinner).

We see the late-season ascendance of Ellsbury and Ortiz, and here is the power surge from Curtis Granderson (a .328 ISO, just under Bautista's .336).

The sabe crowd will decry this idea, but should we give a point for a .350+ BA? It happened only ten times across the five AL epicycles in 2011. It's not part of the system at the present.

If not .350, how about .400? Miguel Cabrera is the only player in baseball during 2011 to have a two-month stretch where he hit .400+. We're inclined to think that we shouldn't bother with BA, but it's at least worth discussing. In a few of these years, such tiny point increments could make a difference as to whom the Ptolemaic system sees as the MVP. (If you're paying attention to the Tot column as it's been floating by, however, you'll know that 2011 is not going to be one of those years.)

We stuck Pedroia on here just to show how much his performance cooled off as the season moved toward its end. Surprisingly, as measured by OPS, Ortiz was the Sox' best hitter in August-September, despite Ellsbury's power surge.

Down in seventh place for the "last epicycle," we see Jose Bautista coasting home. We'd written back in August that we felt the race was a blanket-toss between him and Gonzalez and Granderson. Note that those two guys faded away more than he did.

Meanwhile, Cabrera and Napoli are charging down the stretch, and it's probably not that much of a coincidence that their two respective teams had the best records during September.

Should there be another point added for runs scored minus runs scored on homers? Do we want to credit someone for the spikiness of their ability to score in a concentrated portion of the year? The standard there might be 30 more runs scored than runs scored on HRs, with a minimum of 10 HRs hit over the epicycle. We would have awarded this eight times over the course of five AL epicycles. Ian Kinsler is the one who did it in August-September. 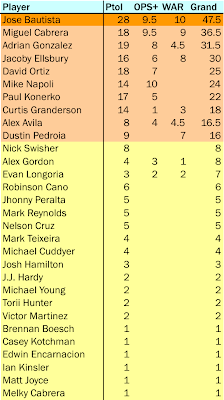 So, after all that, we add up the Ptolemaic points, factor in the rankings for OPS+ and WAR, add from left to right across your dial, and we wind up with the not-especially-surprising conclusion that Jose Bautista is the AL's 2011 MVP. If we'd had this method up and running in August, we wouldn't have suggested that we simply throw a blanket over Jose, Adrian and Curtis.

This (at left) would be the order of voting that we'd place on any MVP ballot that we were asked to fill out.

What about Justin Verlander, you ask? Earlier we'd suggested that the Tigers' ace could be a consideration in the voting if he was able to win 25 games, with his other stats remaining intact. That was a bit too simplistic. A pitcher really needs to have two factors going to crash into the MVP race, especially given that there is a separate award handed out for their achievements. They need to win a huge percentage of their games and they need to excel at all the other stats--not just leading the league, but doing so at a historically rarified level. 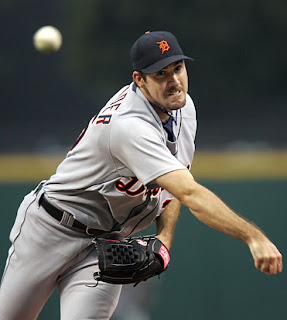 Sandy Koufax' 1963 MVP award can speak to some of these issues, though it will be controversial to some because his ERA+, as measured by the standard method for computing park factors, is too low to be considered dominant (though the WAR data, compiled from total runs allowed and a method that rewards quantity of work as well as quality, contradicts this conclusion).

Koufax won 20 more games than he lost--that seems like a good starting benchmark for letting a pitcher into the discussion. His team went 34-6 in his starts--that's a matter of luck (and good relief pitching), but it's something that needs to be given some weight when determining the point when a pitcher crosses over into MVP territory.


To crash into an MVP race as well as the Cy Young race, a pitcher should at least score .800 on his expected winning percentage using runs scored/runs allowed. Verlander had a great season--he's a Cy Young winner for sure. But he's just below the threshold of being let into the MVP discussion as we see it. 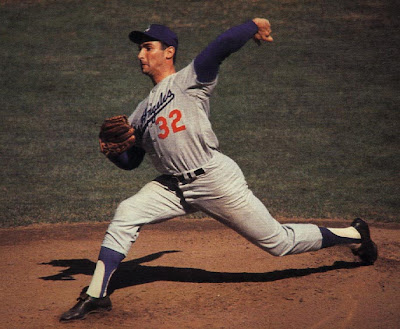 Is he a better candidate than many of the hitters at the top of the Ptolemaic charts? Absolutely. If the concept of separation wasn't something that we considered to be important, he'd at least be fifth on the list, and possibly as high as third. But we have an award for pitchers already, and we should really reserve crossover for cases that are historically unique, that are based on the context of the individual season.

The conclusion here is that we shouldn't consider a pitcher for MVP at all unless we can demonstrate that he should be voted #1. Koufax in '63 has a case to be made for that, while granting that some of his stats (especially when adjusted) can be used as counterarguments. Verlander only has his WAR total to make the case for him, and while that's impressive, it's not quite enough given the principles discussed above. Clearly, YMMV.
Posted by Near-Genius Nephew at 1:11 PM