While we are holding our breath to see if the infamous BBBA "voodoo" will bring us a seven-game series, it's a good time to thank Tony LaRussa, whose overwrought genius has been in roadkill mode over the past week, taking his team from what could have been a five-game closeout into an uphill struggle requiring that magical (but increasingly elusive) seventh game. Perhaps this has been Tony's plan from the start. 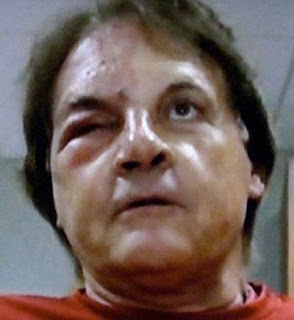 But before we press on to the ostensible subject of this post, we also want to put forth our favorite pet theory concerning Tony. He's not known for his modesty when it comes to managing or much of anything else, but this year he showed a great deal of personal courage by coming to work looking like something from a Ed Wood horror film.

The theory is that it was all a smokescreen: this wasn't a case of the shingles. It was the aftermath of plastic surgery.

Swelling is not unusual with a face lift, especially one that's centered around the eyes. The amount of swelling that Tony had was extremely unusual, of course, but that's because he is the kind of singular fellow that anomalous events happen to with uncharacteristic regularity.

Such as his surreal managerial performance in Game Five, a classic case of someone's facelift being too tight and affecting the proper flow of blood in the brain.

(Hey, you gotta admit that it's a more plausible reason that the one Tony offered up after Game Five went awry...) 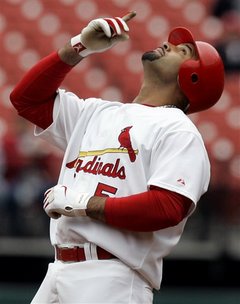 Let's move on. Albert Pujols' three-homer game in Game Three received a lot of justified attention, with the usual back-and-forth on the quality of the feat in terms of that most favored realm of baseball--Eternity. (It's especially privileged during October, the month where the game swells up like a peacock, coming dangerously close to overstaying its welcome.)

We are not here to assess Albert's Arlington depth-charging in terms of such an eternal pantheon. We simply want to take a look at the entire event set--all 126 instances where a hitter has slugged at least two homers in a post-season game.

First, let's note that the reporters (99.9% of them) underreported the incidence of three-homer games in the post-season. They focused on the World Series, where legendary players have been the only ones to manage the feat--legendary figures who, until Albert dared to join the ranks, were all Yankees. 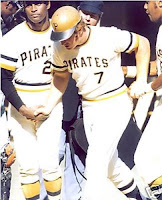 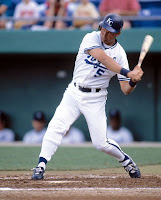 It seems only fair to report here that there are four other players who have hit three homers in a post-season game. Should we sweep these guys under the rug because they didn't happen to do it in the World Series? The post-season is now everything beyond the regular season, at least until Bud Selig's dying act as Kommisar serves to invert this relationship.

The other players to hit three homers in a post season game are: 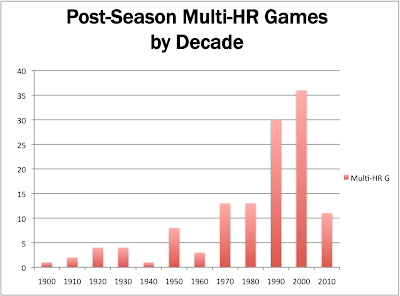 So what would you like to know about these 126 multi-homer games? You can find out exactly who they are by plopping yourself over to the page singled out herein at Forman et fils.

As always, we start out with a chart that shows the basic frequency distribution of post-season HRs by decade. It's cheerfully noted at the outset that there is nothing especially electrifying here, given that the expansion of the post-season in 1969 and 1995 explains the jump in post-season HR. Still, it must be said that the jump is rather impressive despite this relativizing fact.

Next up is a table showing the leaders for most multi-homer games in the post-season. It's impressive to note that even with all of the expanded opportunities to have multiple homer games, the all-time leader in this category is still Babe Ruth. The Bambino did it four times.

The only other player to do it more than twice is our old friend Manny Ramirez. We miss ol' Manny, and harbor a not-so-secret wish that he could have found a way to hang in there with the Rays and made at least one more post-season. 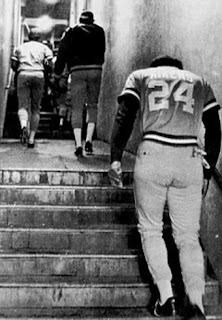 The folks who've had two multi-HR games in the post-season are by and large a distinguished group, with the possible exception of a singular fellow named Willie Mays Aikens. Willie will certainly have his defenders: his lifetime OPS+ is 123, which isn't the worst of those players on this list. It's the cocaine and the prison record that makes Willie more than a bit infamous. The record that Willie might hold (this is one that Bill James probably knows, given his penchant for "popular crime") is the longest prison sentence handed out to a major-league baseball player (fourteen years). I'm guessing that it isn't the record. In any case, Aikens is one of only two players to have multiple-homer games in the same World Series: he pulled off this feat in 1980. Twenty-nine years later, Chase Utley became the second player to do it. Ironically, they both played for losing teams.

This might be a good time to toss in a tidbit about players having multi-homer performances in the same game. This has happened three times, beginning with the only teammates to ever do it. Wanna take a guess? Yes, that's right, it's Ruth and that other guy--you know, the one named Lou Gehrig. They did it against the Cubs in Game Three of the 1932 World Series.

The others? Troy O'Leary and Jim Thome did it in a game between Boston and Cleveland in the 1999 ALDS. Four years later Eric Karros and Chipper Jones did it in the 2003 NLDS, the one that pitted the Cubs vs. the Braves.

Care to know which team has had the most post-season multi-HR games? C'mon, you already know the answer to that question. (Hint: it ain't the St. Louis Browns.) Our chart of the multi-HR games by team spells out the obvious, but it also tells you how often the team with the multi-HR performance proves to be the winning team. The effect is massive, as a certain class of analyst might say: teams have a collective 98-27 record in games where someone on their team hits two or more HRs (a .784 WPCT).

The other thing that comes to light from perusing this table is the fact that the World Series still holds the edge in the overall number of multi-HR games (although that may be due to the head start that the Fall Classic enjoyed from 1903-68). Since 1969, the two rounds of division playoffs have accounted for 73% of the post-season multi-HR games: it's only a question of time before the non-World Series post-season will overtake the World Series in the overall list. After all, there are far more playoff games than World Series games.