As promised (threatened?), more charts with various stats broken out by the first letter of a player's surname. We stick with our "retro" stance for a bit longer and focus on singles--a stat that rarely gets broken out by itself. 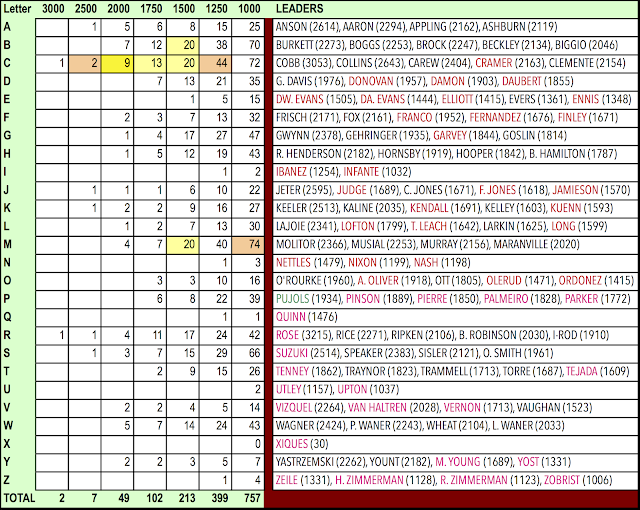 If you are cross-walking between posts, you'll note that the number of players with 1000+ singles in their career is a bit more than half of the number who have 1000+ hits. And if you aren't cross-eyed or color blind, you'll note that we inadvertently shifted the shade of red in the middle of the table where we were designating the players on the singles leader boards who are not in the Hall of Fame.

It would seem that getting two thousand singles is a good bet for making it into the Hall, however; only two players with such a quantity of one base hits (Doc Cramer and George Van Haltren) are on the outside looking in at Cooperstown. (There's also Ichiro Suzuki, but we're figuring that he'll make into the Hall at some point in the next decade.)

Of course, the man with the most singles--Pete Rose--is also MIA for the HOF.

Posted by Near-Genius Nephew at 11:49 PM