It's one more testament to how the game has changed in the century since the introduction of the lively ball that our first "outlier scenario" above was mostly clustered in the 1920s-1930s, and the second such scenario is building to a peak since the bottom dropped out of the offensive explosion in 2009.

But let's not dwell on that--particularly with so much strife around us at the moment--a senseless, reprehensible war in the Ukraine, and a stupid, cynical "war" perpetrated by the baseball owners. (And then there's the great retreat from WAR evinced by the neo-sabes, who've finally signaled that the construct they've been trying to cram down people's throats for the past twenty-five years is not ready for the real world...assuming, of course, that a "real world" still actually exists.)

OK, that was a bit more "dwelling" than we'd suggested, but so it goes. Before seeing our latest "alpha" charts for OBP and BBP, ask yourself: how many players will be in the "leaders" sections for both? We have twenty-four letters with enough data to produce substantive leaders lists--will we average the equivalent of one match per letter? Let's find out.

Here is the chart for OBP...remember, players in red type are Hall of Famers. And remember as well that this list includes only players with at least 5000 lifetime plate appearances... 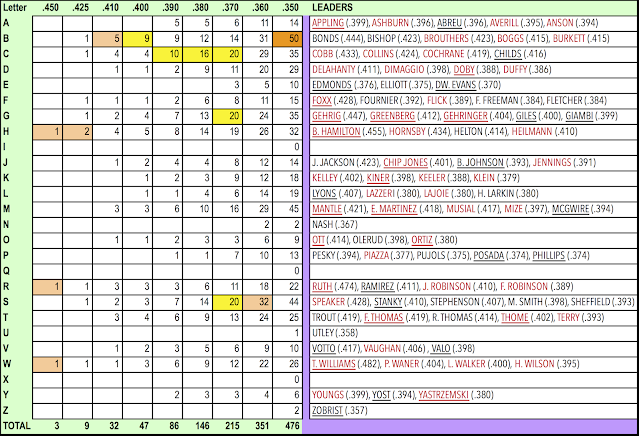 Note that there are 50 players in the leaders list for this chart who are in the Hall of Fame. That doesn't correlate exactly with the players who have a .400+ OBP; several of those guys (Todd Helton, Manny Ramirez, Mike Trout, Joey Votto) are either still active or are still on the HOF ballot. And there are a few .400+ OBP guys who are never going to get in for one reason or another (Max Bishop, Joe Jackson, Billy Nash, Eddie Stanky, Riggs Stephenson, Roy Thomas).

Now let's look at the players who walk a lot. Here's the distribution of BBP by percentage of plate appearances (BB/PA) and the accompanying leaders list: 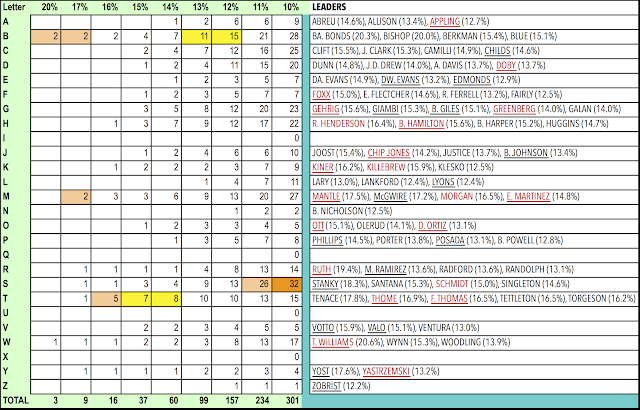 So how many players are on both leaders lists? Count up the number of players whose names are underlined. The answer is 28. So it's a reasonably robust overlap.

But...how many of these high-BBP players shown in the above chart are also in the HOF? Remember that the high-OBP guys numbered 50.

It turns out that there are only 21 high-BBP players on this leader list in the Hall of Fame. Of course, we're missing some folks, because the leaders list is not comprehensive. If we define a high-BBP player as someone who walks at least 12% of the time, that produces a list of 35 high-BBP players with plaques in Cooperstown.

Which is still way below the number of high-OBP players in the Hall.

The conclusion is clear: walking remains an unsung skill. While it is clearly not as significant as getting on-base via other means (particularly the extra-base hit), it is much more difficult to walk your way into Cooperstown.

And it's become almost impossible to do in the time frame after the game expanded. The only player with low power totals and high walks to make it into the Hall of Fame in the past sixty years is...

A game where such an offensive combination is possible for more than one player in sixty years is a much better version of the game than what we have today. Baseball needs to address this--but...

...see our third paragraph above.

And the beatdown goes on. (Sigh.)

[EDIT: Note that some of this is indeed simply structural to the game...the distribution totals for the two charts confirm this. Note that it's half again as easy for 5000+ PA career players to achieve an OBP of at least .350 than it is for them to walk at least 10% of the time. Players like Boggs have always been infrequent; but it's imperative that they don't become extinct.]

Posted by Near-Genius Nephew at 4:37 PM