Ah, the September song. Is it a preview of "coming attractions" as regards offense?

Joe P., who felt the urge a couple months back to double down on the "take and rake" offense, would doubtless point to the fact that run scoring levels are still relatively robust (4.45 per game in 2018, and 4.44 in September) and dismiss the dip in batting average (BA) for the month (.243) as being meaningless. (After all, batting average is meaningless, n'est-ce pas? So long as isolated power (ISO) can remain at all-time highs, offense can remain "robust enough.")

But such is not going to be the case if one other factor continues to follow its trend line. The rise in strikeouts--more specifically, the rise in the percentage of strikeouts that occur in plate appearance where a batter has two strikes on him--will at some point have a cratering effect on batting average, which will domino in to on-base percentage (OBP) and slugging average (SLG). 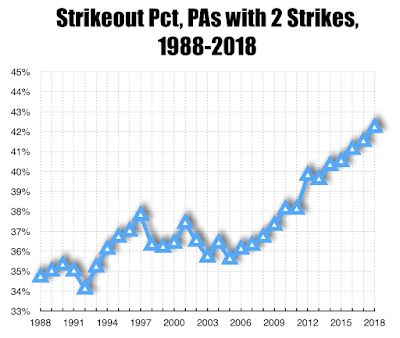 Our chart at right shows the K-to-2-strike percentage as it's evolved from 1988 to 2018 (these are the only years where the play-by-play data is detailed enough to capture this info). As you can see, this percentage is slowly but inexorably on the rise and has risen by 30% over thirty years--with the fastest rate of gain occurring in the past decade after a long lull due to the "baked-in" effects of the offensive explosion.

Additionally, BA and tOPS+ values for two-strike situations have been decaying over this time frame. (The tOPS+ stat measures the OPS value of the two-strike PA against the overall OPS. This was close to fifty percent in 1988 and remained relatively constant throughout the explosion until 2009; now, however, that figure has moved down into the low forties. BA is declining along with it, with two-strike PAs reaching a new low this year (.173).

The direction of the trend lines means that the so-called "smart adjustment" that Joe P. touts (admirably defending the tenets of an increasingly senile sabermetrics) is pushing everything into perilous territory. Not only is the game becoming more two-dimensional offensively, but it's skating into a risky region where additional pitcher adjustments will bring BA down to levels seen in two months during 2018 (September: .243, June: .245) for the entire season.

Note that HR totals did recede this year (from the absurd 1.27 in 2017 back down to 1.15). But keep in mind that such levels have to at least be sustained in order to keep offense "robust enough." Pitching adjustments, in two forms--experiments with in-game pitcher usage, and analyses to counteract the "launch angle" phenomenon that was partially responsible for the HR spike--are beginning to make themselves felt. It's unlikely that hitters are going to adjust to such alterations by pitchers in a short period of time--leaving it highly likely that home runs will drop and strikeouts will continue to rise...

...Which will result in batting averages that look disturbingly similar to what we saw in the mid-to-late 1960s. 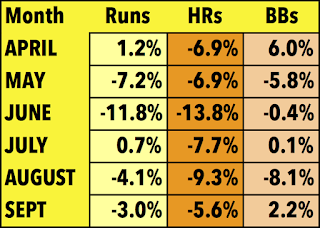 How far can HRs drop? That's harder to predict until we see more evidence of pitching staffs improving. In 2018, we had an unusually high number of really bad teams and really good teams. Several of the really bad teams barely improved their HR allowed rates, while the really good teams showed a higher rate of improvement. When such improvement becomes more uniform, it will begin to effect teams that managed to improve their HRs hit in 2018 and a more pronounced decline will set in.

As you can see in the final comparison chart for R, HR, and BB (each month in 2018 is compared with the R/G, HR/G and BB/G from its corresponding month in 2017), the decline here was consistent but relatively uniform. (BB/G has a frequent pattern of being higher in April and September, due to weather and/or roster issues...as you can see, June was the biggest outlier, but that's because the HR rate was simply insane in June 2017 and it drove R/G up toward "offensive explosion" levels.)

A uniform year, such as was the case in 2018, is often followed by a more jagged change in the following years.

Next year we'll run these numbers for two parallel years, showing the months of 2019 against their analogous months for 2018 and 2017. And we'll be back a bit later this month with a look at big swings in BA, OBP and SLG at the league level over the history of baseball. Stay tuned...
Posted by Near-Genius Nephew at 4:09 PM