POST-SEASON SNAPSHOT: A SIGH OF RELIEF FOR THE BULLPEN

So, OK, this is not really a "post-season" snapshot. There are no stats on post-season bullpen performance in this post.

What we do have, however, is a meditation on the changing perspective on the bullpen and its strategic importance for success that reverts back to more straightforward stats in order to capture those changes.

No one needs to be reminded that relief pitching is undergoing a transformation--the Tampa Bay Rays have made sure of that. We can expect more relief innings over the next couple of years as other teams attempt to emulate their "opener/delayed-starter-in-relief" strategy that was seemingly such a success.

But the value modeling that sabermetrics has imposed upon the game doesn't see it that way. Those numbers suggest that relievers did less to help their teams win games in 2018 than was the case in the previous seasons. Those modeling stats presume a different reality than what people see when they watch an individual game. And they tell us, year in and year out, that relief pitching has a net negative value in the overall model. This season, relief pitching had its most negative overall value according to Wins Above Average than has been the case in nearly half a century. 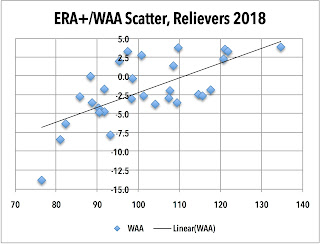 Is this hard to believe? Not for some. We find it hard to imagine, however, that teams whose bullpens post similar ERAs over a season can have significantly different WAR values. Of course, ERA has been "proven" problematic at the individual pitcher level by the recent attempts to use batter vs. pitcher (BvP) stats the go-to measure; but individual pitchers are not the only measurement aspect that we need to define and evaluate.

In fact, with the increase in reliever innings, it actually becomes more important to develop better aggregate measures for overall team performance in this area. And part of that effort should be to more tightly relate it to actual wins and losses. 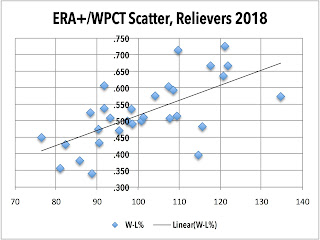 And that's what we can at least start to do...by putting together these various measures in scatter chart relationships. The ERA+/WAA scatter correlation shows a lot of discrepancy in the -2.5 WAA range, with ERA+ values being all over the chart. Some high-achieving WAA teams are actually have sub-par ERA+ values.

How, then, is this any real advance over a ERA+/WPCT scatter correlation? While there are always teams who "beat" their WPCT projections based on their ERA+ (due to the fact that such teams give up extra runs in games already lost. 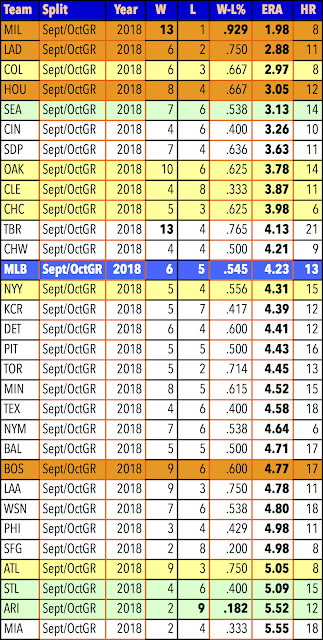 The solid correlation in the 90-110 ERA+ region with WPCT demonstrates that there's general set of principles that remain in operation in the mid-range of the distribution, but that it frays a bit at the extremes. That's a more natural set of relationships based on real-life game situations. It suggests that there's more meaning in reliever WPCT than has been claimed for the past twenty years.

And the game is changing in ways that will likely reinforce this. When we look at the final month of the 2018 season, we see several interesting aspects of how this is manifesting itself.

In September 2018, we can see that certain teams experienced "make-or-break" months with respect to the post-season in terms of bullpen performance. The table at left sorts relief pitching in descending order of ERA.

Looking at it, we can see how one team (the Brewers) clearly rode their bullpen performance into the post-season.

And we can see how two teams (the Cardinals and Diamondbacks) wound up falling short of playoff appearances due to the poor performance of their reliever in the final month. (The third team coded in green, the Mariners, were caught and passed earlier in the year by the A's, who rode their bullpen into the playoffs.)

The color coding here is of some interest. Seven of the teams with the best performance from their bullpens (seven of the twelve with better-than-average ERAs) wound up in the post-season. Three of the top four teams in September bullpen performance are still competing in the post-season at this time (Brewers, Dodgers, Astros--only the Red Sox had a subpar performance from their relievers in September, and they managed to keep a lid on things in enough of their appearances to generate more relief wins than losses).

Relief pitching is not broken out sufficiently in the otherwise overly-parsed situational data for us to know why the Braves could go 9-3 with a 5.05 ERA, but we can make an educated guess: their mop-up relievers in already lost games gave up a lot of runs. A team like the Indians (who suffered a virtually complete reversal in bullpen performance in 2018 after a fine season the year before) managed to blow leads at crucial moments, saddling themselves with losses, but they did not pitch poorly in already lost games.

What we can tell you is that the playoff teams in 2018 posted an aggregate 65-34 record in September games where decisions were picked up by relief pitchers. We'll let you decide if you think that is as meaningless as many still seem to think is the case.
Posted by Near-Genius Nephew at 8:29 AM