We all too often focus on baseball's offensive statistics from the point of view of the offense...which is natural, because the offense is what drives run-scoring. But we don't often look at the offensive stats that accrue from what opposing batters do versus the collective pitching staffs of individual teams. 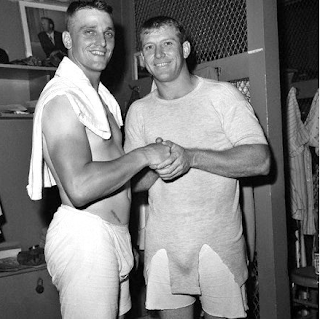 For example, many people knew for years that the 1961 Yankees set a new team HR record. There were three reasons for this, in order of significance: Mickey Mantle, Roger Maris, and the fact that the new record (240 HRs) was a nice round number.

But ask folks what team's pitching staff has surrendered the most HRs in a season and you will receive the "catwalk stare"--that blank look that runway models have brought to "perfection" as they avoid eye contact while making eye contact...

Hell, even we didn't know the answer. (But we promise that our stare will be "gimlet-eyed" at the very least.)

Before we reveal it, however, let's go on record with the fact that it's a record in grave danger of being shattered in 2016. If you've read the posts further below, you know that HRs are currently spiking, bringing us back to HR/G levels not seen since the early days of the 1990s offensive explosion.

And while investigating that trend, we stumbled onto the "Batting Against" statistics at Forman et fils and proceeded to watch our eyes pop when we saw that the Cincinnati Reds had already given up 154 HRs in the first 89 games of the 2016 season.

That rate extrapolates out to a staggering total of 280 HRs, which was characterized above as "shattering" the current record.

The current record for HRs allowed by a team is 241, which was set by the 1996 Detroit Tigers. (The team record for hitting homers has evolved up to 264, set by the 1997 Seattle Mariners, and there has always been a bit of a "lag" in the "homers allowed" stat.)

But those Reds look to be breezing their way to a total that will surpass that. We checked to see if this might be due to a series of short-term performers on the Cincinnati pitching staff who gave up some mind-boggling number of HRs before being sent to the back to the minors--one pitcher (Jon Moscot) fits that description, having allowed 10 HRs in just 21 1/3 innings. And Alfredo Simon, an established starter for the past several years who's currently sporting a 9.85 ERA, has also been prone to the long ball: 14 HRs in 53 IP.

That might seem to mitigate the Reds' chances a bit, but we also checked the HR/G rate in the first part of July, when neither of these estimable gentlemen were active--and they are still giving up taters at an elevated rate: 20 in the past ten games.

So this is going to be very interesting to track as the Reds' abysmal season plays out. (And poor overall performance, rather unsurprisingly, goes hand-in-hand with giving up carloads of HRs. Of the 71 teams that have allowed 200+ HRs, only 13 have managed to play at least .500 ball while doing so.)