Too bad that Clayton Kershaw is down indefinitely with back miseries, it would have been interesting to see just how his terrific start in 2016 would have played out with a full set of starts. 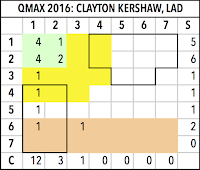 His QWP (QMAX Win Pct), built from the probabilistic won-loss from each of the 49 sectors in the QMAX matrix grid, was an excellent but not superhuman .742. The reason it's not hovering closer to .800? You have to really avoid "hit hard" games...Kershaw's 13% is excellent but not superhuman. You've really got to be in single digits with respect to HH to optimize your QWP. (Now there's some jargon for the ages...) 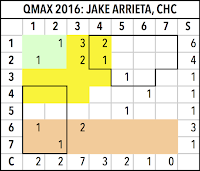 Jake Arrieta is showing some slippage in comparison with last year's CYA form. Over his first nine starts, his ERA was 1.29--a good bit lower than what even his QMAX scores to that point (2.33 "S," 2.89 "C") would have projected...but these numbers were still close to his overall numbers in 2015.